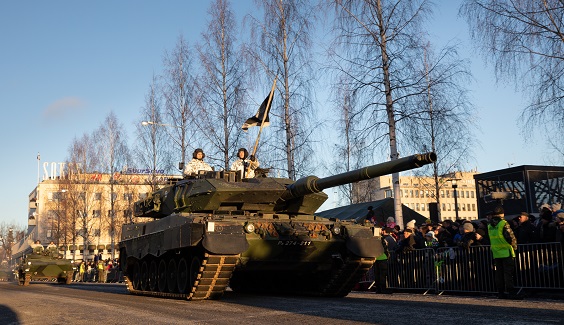 The national Independence Day parade will be held in Tampere on 6 December 2019.

Comprising troops from the Finnish Army, Navy, and Air Force, National Defence University, Finnish Border Guard, Finnish Defence Forces Logistics Command as well as veterans’ and national defence organisations, the parade will include a total of circa 1,300 persons and more than 50 vehicles. The pass-in-review will also feature a heritage cavalry detachment of the Tampere Region Cavalry Guild Association.

at 12.00 Review of troops at Ratina Stadium

at 13.00 Pass-in-review on Tampereen valtatie

at 09-15 Equipment display in Ratinanniemi

Please arrive in good time for the review as the troops will start forming up at around 11.30. Come along and celebrate Finland’s independence with us – the events are free of charge! Updated information on the parade day events and traffic arrangements will be available online at https://puolustusvoimat.fi/en/parades.