Conducting research on factors that affect the service’s operating, the Army Research Centre produces analyses for examining in which direction the Finnish Army, its service branches and functional areas need to be developed.

Established in conjunction with the defence reform in 2015, the Army Research Centre comprises the Land Combat Centre and Research and Development Department operating as a battalion-level unit subordinate to the Army Academy with its personnel strength of approximately 70 substance-matter experts and work site locations in Hamina, Riihimäki, Hattula and Niinisalo. Each year, the Army Research Centre produces over 50 research reports that range from minor field test reports to extensive research reports.

The research on the Army development relies on and uses as its seminal reference the strategic research on defence system development primarily produced by the Finnish Defence Forces’ Defence Research Agency in particular.

For the Army Research Centre, the key cooperation partners include the Finnish Defence Forces’ Defence Research Agency, the National Defence University, and research establishments of the other services as well industrial strategic partners. Moreover, research cooperation activities will be on the increase with international stakeholders such as, for instance, the NATO Science and Technology Organization (STO), the U.S. Army Training and Doctrine Command (TRADOC), and the Nordic countries.

Contributing to long-term research carried out for future purposes, the Army fields of research look into how to replace the service branches’ capabilities as the life cycle service span of weapons systems will be retired. Since the service branches never wage war as such, the entity of Army combat remains the decisive factor. Thereby the service branches’ concepts form a logically fitted supplement within the Army combat doctrine. This furthermore provides the basis for setting the forces’ performance capability requirements that in turn determine the specification requirements for the joint effects inflicted by deploying varying weapons systems and standardized procedures.

The operations-tactical research is threat-based and conducted by the personnel of the Land Combat Centre, Army battalion-level units, establishments subordinate to the Defence Command, other services, and the Finnish Border Guard. Research cooperation ensures adopting a comprehensive approach that accounts for the joint-operations framework in the research of land combat operations. The Land Combat Centre has carried out research on, among other things, executing land operations in a rapidly evolving situational framework. The objective of this research is to produce the utilisation and operating principles of the Army and its forces in a changing operational and security environment. This research emphasises assessment of the operational and security environment, execution of land combat operations as part of the Finnish Defence Forces’ operations and inter-agency cooperation, as well as charting the reform needs in the structures of the Army wartime troops.

Over the course of the year 2018, the focus of the operations-tactical research is undergoing a shift in its focus. As regards Army materiel and personnel, the Army capability remains well sustained until the beginning of the 2030s, when the life cycle service span of a number of weapons systems will undergo decommissioning. This means that the trip tick for land defence in the 2030s is outlined in the start of the 2020s to build up the necessary capability as a controlled process. This outlining has begun by examining the operational environment of the 2030s in light of the promptly advancing technologies. In this realm, one of the key factors examined is the development of autonomous systems and artificial intelligence with ensuing military applications. As such, conducting research with this wide a scope is challenging and presupposes extensive cooperation both within the Finnish Defence Forces and internationally.

The Research and Development Department of the Army Research Centre carries out the set assigned field tests and testing activities part of the Army programmes. The department’s key clients are the Inspectors of service branches who guide the work of the department’s implementing sectors as owners in the process of capability development. The versatility and wide scope of the work carried out by the department is well characterized by the studies conducted that, for example, range from examining the equipment of an individual soldier all the way to studying the command and control systems of an Army formation-level force as well as the Army information system. At present, the end products most visible to Finnish Defence Forces’ troops include the software-defined radio -based communications system M18 and MATI2 information system with its MATI2 combat control system.

Parallel to the set testing drills, research and experimentation activities are also carried out in conjunction with conscripts’ combat exercises and in refresher training exercises. As a result of long-term research and testing, we have developed standardized operating procedures that are most optimal in our operational circumstances with technological solutions that are best suited for serving in these conditions. 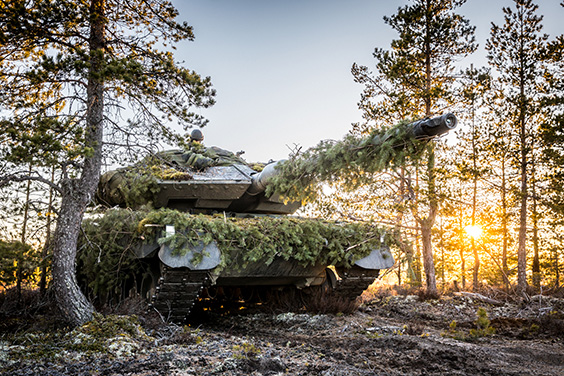 The Army Academy is the army's service school. Its main tasks are training salaried personnel and conscripts, Army research and development, and readiness duties.