Character of Battlefield in the 2030s

The battlefield of the 2030s equals a network that undergoes constant changes and requires simultaneous operating on land, at sea, in the air, in space as well as in a cyber operating environment.

Novel technologies, unmanned systems and artificial intelligence pose challenges to the battlefield operators. That said, the majority of capabilities of land, maritime and air defence still retain their critical role in the battlefield.

The changes in the operational environment and versatility of threat scenarios challenge the defence planners as well. The advance warning time of military conflicts has decreased and the threshold for engaging force has become lowered. This has considerably raised the level of standards set for the requirements concerning both forces’ cababilities and individual soldier’ skills. The pre-emptive preventive capability and credibility of defence are grounded on adequate readiness and repelling capability proportionate to the operational environment. Apart from employing military force, nation-wide preparedness also emphasizes inter-agency cooperation with other authorities.

In versatile operational environments, parallel to employing traditional measures in waging war, the procedures utilized include, among others, hybrid warfare methods involving diplomacy and politics, cyber-attacks, impacting the given economic setting, applying joint information effects and disinformation, taking advantage of local unrest, and having paramilitary troops as well as special operations forces and other military units operating side by side. 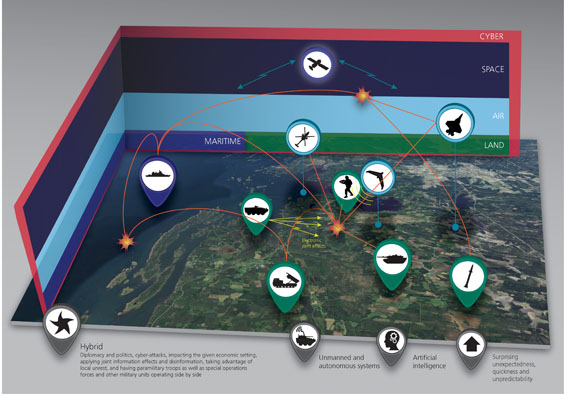 The emergence of versatile technologies makes the host of future battlefield operators increasingly varied and challenged. Due to the rapidly evolving technologies, the future showcases increasingly sophisticated systems and unmanned systems in space, on land , in the air, at sea and subsurface. Versatile unmanned ground and aerial vehicles operate in reconnaissance, support and combat missions either non-supported or as part of swarms in the battlefield. The control of these devices outside the battle space proper enables assuming more substantial risks than before, since there is no longer threat in own casualties In the 2030s, also autonomous systems and robots become utilised. The autonomous systems sustain the ability to operate without continuous control. Over the coming decades, artificial intelligence advances further to provide support in the utilisation of overall capabilities.

Parallel to these new emerging technologies, traditional methods of waging war will continue to be developed as well. This means that armoured vehicles, aircraft, helicopters and combat vessels continue to be part of the character of battlefield in the 2030s. However, the future weapons systems will be capable of farther-ranging and more precise joint effects targeting performance than before. Thereby the character of future battlefield may be viewd to feature, apart from the conventional and traditional elements, also those factors that will turn the battlefield into an entity that is multidimensional, rapidly changing, surprisingly unexpected and increasingly technological in its characteristics. This means that it is mandatory to sustain capability in responding to all these characterisics by means of both own joint effects capability and by force protection counter measures against the adversary’s capabilities and ensuing impact.

In the future battlefield, successful operating requires sustaining an optimal common operational picture together with an agile and adaptable networked command and control system. We must retain the capability in utilising the characteristics of versatile operational environments. The forces and the systems must be provided force protection but they also need to be rapidly re-concentrated for joint effects. There must be a sustained targeting capability that enables delivering joint effects against the adversary within a farther range and increasingly effectively. This calls for establishing a balance between quality and quantity while developing both forces and weapons systems. Capable individual soldiers with sustained performance capability remain the focal point, as does their confidence in their own cause.