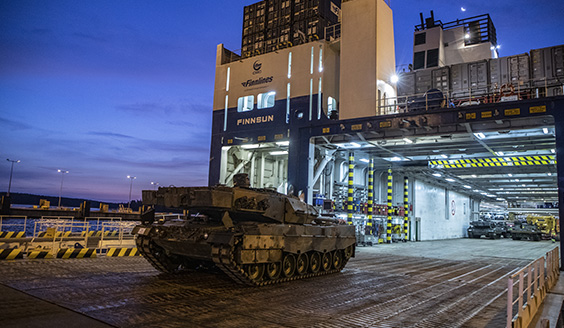 The Finnish Defence Forces has received the total delivery of the Main Battle Tank Leopard 2A6.

In 2014, Finland made the decision to procure altogether a hundred used surplus Leopard 2A6 main battle tanks from the Netherlands. Now all the procured main battle tanks have been received serviced and in good condition with the procurement project proceeding as planned.

- The procurement project of the Leopard 2A6 MBT has proceeded on schedule and in good cooperation with the Netherlands and all the partners partaking in the project. With this procurement purchase, the Finnish Army sustains a significant new point capability and considerable capability in meeting engagement combat, Inspector of the Infantry, Colonel Rainer Peltoniemi points out.

In 2016, conscript training in utilising the new MBT equipment was underway in the Armoured Brigade. The Leopard 2A6 MBTs are in training use also in the Karelia Brigade. With the fielding of the new 2A6 equipment, the Finnish Army has expanded and developed inter-branch interoperability between the armour and the infantry in all of the Army and done so by resorting to the previous 2A4 main battle tank equipment as well.

Compared with the earlier versions, the LEO2A6 MBT characteristics include improved firepower, more advanced ballistic protection and internal shrapnel protection as well as vehicle commander’s independent night operating capability. In the western hemisphere, the Leopard main battle tank is one with the most extensive user communities. Exchanging information, its organised user community aims to develop the tank’s characteristics in cooperation with the defence industry. The main battle tank will continue to be in operational use well into the next decade.

- We put this new equipment into training use promptly with very good experiences. The conscripts have been motivated in using the new equipment and the trained MBT crews have been able to put their skills to test in demanding and versatile international training exercises including the exercises Arrow and Northern Wind. It has been excellent to see how in such a short time these tanks were introduced into operational use and the type of striking effectiveness that has already been achieved, Colonel Peltoniemi summarises.

In accordance with the procurement purchase plan, the first MBTs arrived in Finland in May 2015. The main battle tank procurement also included acquisition of spare parts, training simulators, special tools and testing equipment as well as an ammunition lot. Prior to being fielded into service, the MBTs undergo national modifications as applicable. The value of the contract was a total of 199,9 million Euros.

Link to the procurement release by the Finnish Ministry of Defence 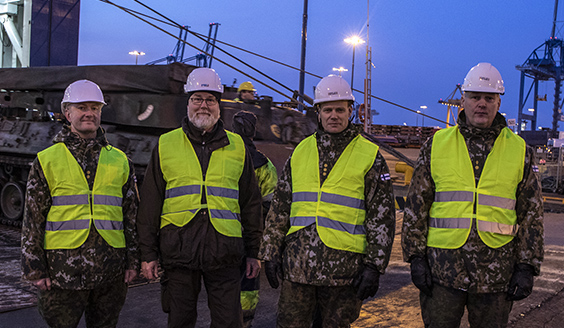 The last MBTs arrived at the Vuosaari Harbour on Friday 25 October 2019 at 06:45. Organising the tank reception, as those for all previous batches as well, Project Manager of the Surplus Project, M.Sc. (Tech.) Aki Toivonen on the 2nd left. On the right, Systems Engineer LEO2A6, Major (Eng.) Markus Vihelä, Inspector of the Infantry, Colonel Rainer PeltoniemiCommander of the Häme Armoured Battalion, Toivonen and Lieutenant Colonel Riku Rantakari.