Finland will participate in the exercise SIIL 18 in Estonia

The strength of the Finnish training exercise detachment will be approximately 250 persons, the majority of whom will be conscripts from the Finnish Rapid Deployment Force (FRDF) trained by the Pori Brigade. For the purposes of this exercise, the conscripts will form a logistics company and a military engineer company, whereas Finnish Defence Forces’ personnel will undertake tasks involving instructing and staff officer duties. The main effort of the Finnish participation will be in southern Estonia in the vicinity of Vöru. The Finnish senior national officer of the training exercise detachment will be Lieutenant Colonel Tero Savonen.

Overall, the total stregth of the training exercise will be approximately 13,000 persons. Apart from the host nation Estonia, the participants will include 13 other nations, namely, Belgium, Georgia, Ireland, the UK, Canada, Latvia, Lithuania, Poland, Sweden, Germany, Finland, Denmark, and the USA. The exercise will be led by Estonian Chief of Defence, General Riho Terras.

With its scenario based on conventional combat operations conducted in the regions of southern Estonia and northern Latvia, the exercise will be carried out both in training areas and in populated areas.

The training objective set for the Finnish training detachment involves enhancing the personnel’s proficiency in planning and implementing international assistance as well as developing the capabilities of the participating service branch units in international tasks. Participation in the exercise also contributes to facilitating further the competence of staff officers operating in versatile tasks as part of a multinational headquarters. 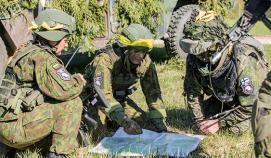