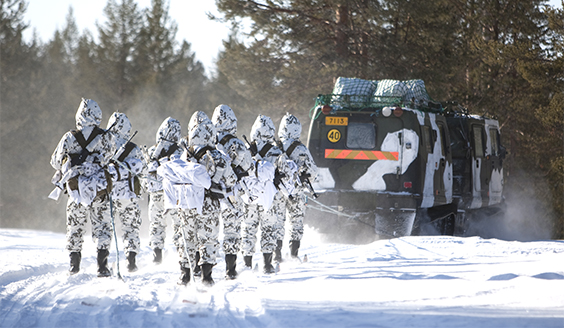 Jaeger Brigade - About us

The Jaeger Brigade trains troops for Northern Finland’s demanding circumstances and units specialised in regional combat in the Lapland area.

The Jaeger Brigade is in charge of ordered tasks involving readiness and operational tasks; it maintains constant readiness to provide support for other authorities.

The Brigade employs around 400 persons.

The Jaeger Brigade carries its social responsibility by providing assistance to other authorities some 70 times a year.

Colonel Kimmo Kinnunen is the Commander of the Jaeger Brigade.

In addition to its Headquarters, the Lapland Jaeger Battalion comprises five company-level units:

The duties of the Military Band include, in addition to performing music at the Defence Forces’ events, contributing to the musical culture of Lapland themed with Lapland’s nature, the indigenous culture’s folk music and ethnic nuances. The Lapland Military Band’s versatile and open programme makes it an actor with a personality in this culturally rich and interactive environment.

Annually, in addition to its own personnel, the Jaeger Brigade trains personnel from the Defence Forces’ different units and military personnel from other countries.

The Jaeger Brigade has excellent circumstances for training in its training areas. These include Mellankangas in Sodankylä, the Kyläjärvi range area and the garrison training area in Rovaniemi and the Pahkamaa range.

Larger-scale live fire and combat exercises can be carried out in Rovajärvi, Western Europe’s largest range.

National ground-based air defence exercises are arranged in the Lohtaja range area, where all the Defence Forces’ missile systems can be trained with. The Lohtaja area is under the administration of the Armoured Brigade.

Training activities can be conducted outside these areas on private grounds based, in each case, on thorough consideration and law.