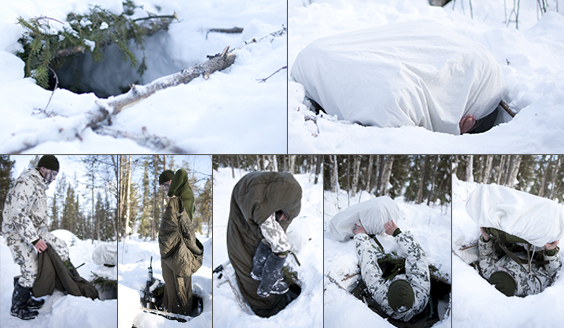 Training in the Jaeger Brigade

The Lapland Jaeger Battalion trains troops to have high operational capabilities for Lapland’s demanding circumstances. Because of high readiness standards, long distances, difficult terrain and extreme weather conditions, leaders and soldiers are required to be capable of initiative and to operate with endurance. In parallel with modern technology and efficient weaponry, skiing and frontiersman’s skills are among the basic skills trained in the Battalion.

The 1st Jaeger Company operates as a high-level readiness unit, and it trains conscripts in their training phase for demanding infantry combat tasks in the attacking echelon in the HQ platoon, infantry platoons and logistics platoon. The unit’s leadership tasks include, among others, infantry platoon leader, forward observer, signal officer, infantry section leader, forward observation NCO, signal section leader, logistics NCO, medical NCO, and transportation NCO. In the 1st Jaeger Company, the military service time of all conscripts is 347 days.

The 2nd Jaeger Company is a high-level readiness unit in charge of training conscripts in their readiness phase. It is tasked with training and maintaining readiness and developing its capability. In addition to taking part in exercises in Finland, the Company also participates in bilateral and multinational exercises abroad.

In the course of the basic training period, The 2nd Jaeger Company selects the conscripts bound to be trained for tank platoon tasks. The training is carried out in the Armoured Brigade. The unit for the readiness phase is formed in December when the training phase in the 1st and 3rd Jaeger Brigades and Armoured Brigade comes to an end. In the 2nd Jaeger Company, the military service time of all conscripts is 347 days.

The unit’s rank and file tasks include: jaeger (assault rifle man), scout, sniper, designated marksman, anti-tank soldier (missile soldier), combat runner, signalman, tracked-vehicle driver, clerk and medic. Media training will start with contingent 2 /19. Conscripts with a suitable background will be selected for this training; their duties will involve photography and production of short films. The military service time for conscripts in the media sector is 255 days, while military drivers serve for 347 days and those in other rank and file tasks 165 days.

The Logistics Company trains logistics specialists for the battle group. Conscripts get trained for resupply, maintenance, transportation, medical, signal and military cook tasks. Conscripts trained to be leaders, truck or combination truck drivers serve for 347 days, medics for 255 days and conscripts in other logistics rank and file duties 165 days.

The Logistics Company’s main training equipment includes vehicles ranging from van to heavy all-terrain truck and heavy machinery, and vehicle-transported maintenance equipment. The training that conscripts have received in the civilian world is considered for selections. The Company also carries out garrison support tasks.

The Rovaniemi Air Defence Battalion trains wartime troops for the three Services and Border Guard equipping them with high operational capability. The modern air threat sets high competence and readiness requirements on ground-based air defence troops. The logistics companies trained for the Air Force must be competent for supporting the battle of the Air Force. Training and exercises are conducted at an efficient pace to ensure that the challenges also posed by the circumstances in Northern Finland can be met. The Rovaniemi Air Defence Battalion is composed of its Headquarters and three company-level units. 1st Air Defence Battery, 2nd Air Defence Battery and Airbase Support Company