Basics of of Marksmanship Training

The Army firing programme defines the firing tables, their goals and execution done in the army during different training periods. The firings are divided into so called basic firings conducted on the firing range, combat and live fire training during live fire exercises and branch specific speciality firing exercises. The brigade firing ranges and the Pahkajärvi field firing area are well-suited for executing different kinds of firing exercises.

Basic marksmanship for a soldier is created with the weapon and marksmanship drills and exercises The Company-level units design the marksmanship training of the conscripts to be a progressive entity where the demands increase according to the training period. This entity includes classroom instruction, training, basic firing and dry firing and combat live fire exercises. The training advances from formal training to applied training exercises and to scenario-based, tactical live firing.

The goal of weapon and marksmanship training during the basic training period is that by the end of the period the soldier knows how to fire an assault rifle and how to handle their weapon safely.

According to the goals set for the basic training period, each soldier should:

know how to function and engage targets both as an individual soldier and as part of a fireteam using their personal weapon. 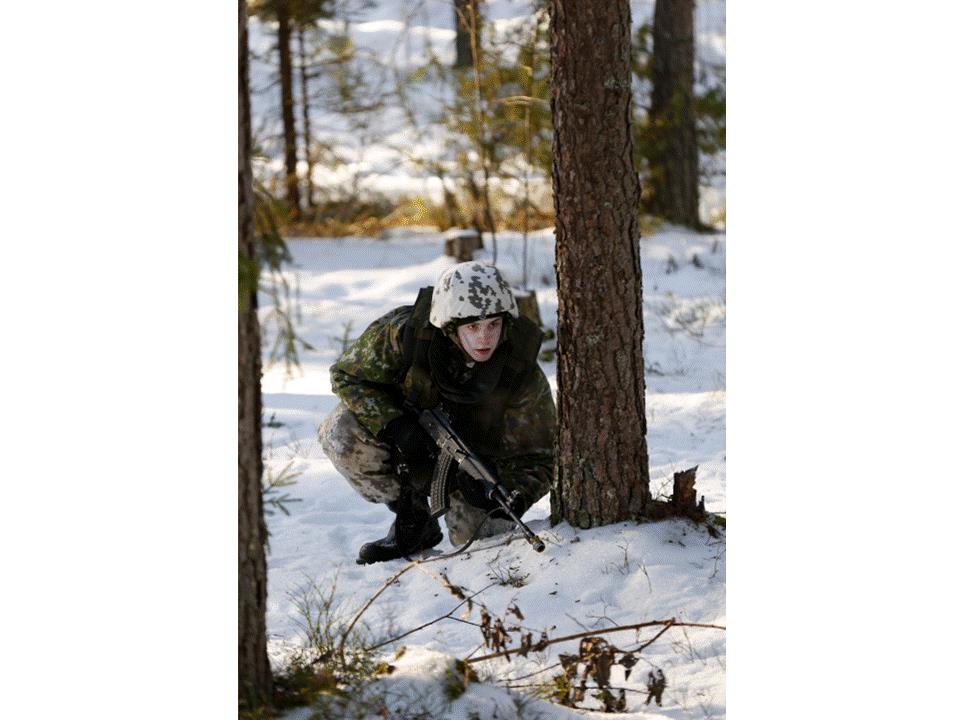 A soldier in the basic training period’s tactical field exercise, ready to advance to their next firing position.

Live fire exercises in field conditions have many new elements compared to the basic firing that is done on the firing range. The targets are harder to detect, the importance of selecting a good firing position is emphasized, and you have to select and modify your stance to suit each firing position so that your rounds will hit their intended target. Another new element is the actions of the other fireteam members and your own actions as a part of the fireteam.

Feedback is important, so that the actions are at the level required by the battlefield. The fireteam and the fireteam members will get feedback from a member of the salaried personnel, the officer in charge of firing, after completing the firing lane. Learning from the feedback can already be seen during the next run of the lane, when the extra nervousness has also gone away.

The goal of weapon and marksmanship training during the special capabilities training period is that after the training the soldier knows how to safely use the assault rifle in combat and knows how to handle and use the section’s and platoon’s weapons as required by their own task and training.

After the special capabilities training period the soldier should be able to use their assault rifle well and proficiently, i.e the weapon handling is safe and as effective as possible. The basic shooting skills acquired during basic training will try to be maintained by still doing the more demanding basic firing exercises and drills. 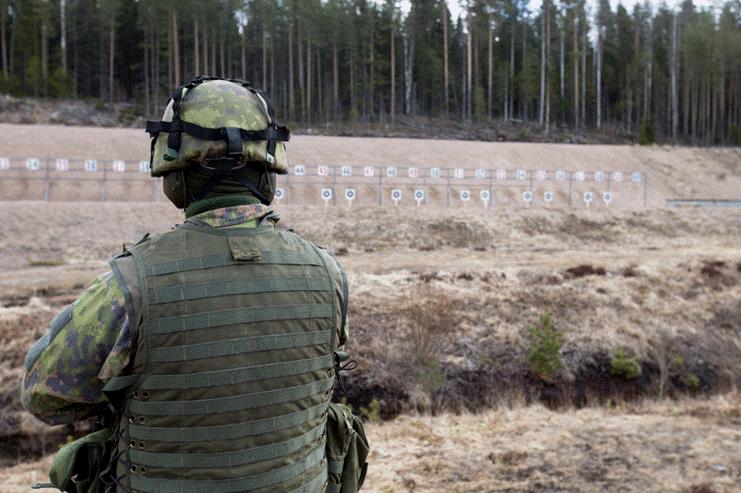 In addition to maintaining basic firing skills the goal is to improve the marksmanship skills by combining marksmanship training with the combat training in such a way that the weapon handling and shooting skills learned can be used in combat situations. 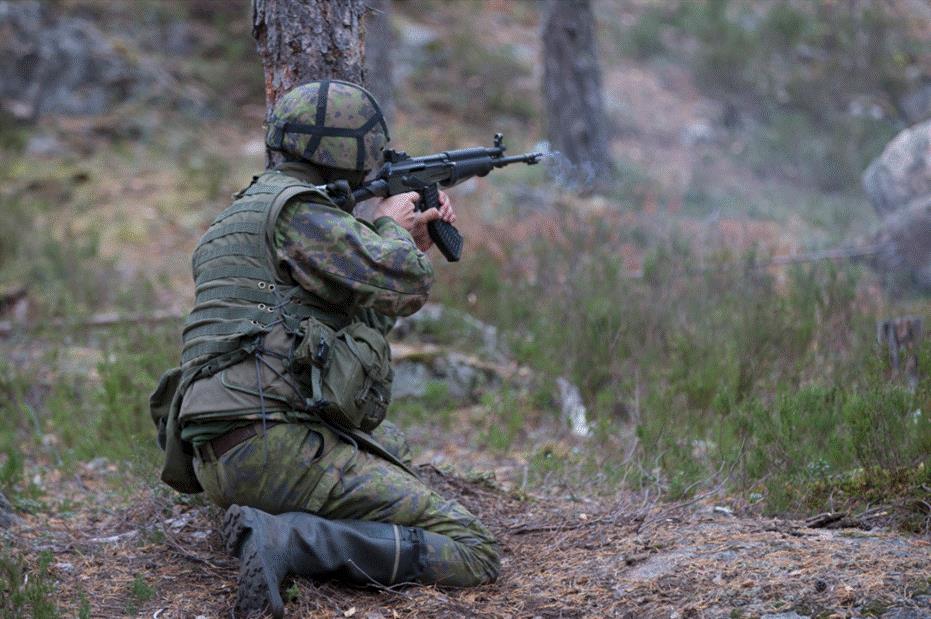 A soldier uses a tree on his route for concealment and support.

The goal of weapon and marksmanship training during the unit training period is that after the training the soldier is proficient in using the assault rifle in combat safely and become trained in the use of section and unit’s weapons in a wartime unit composition. Only some of the brigade’s battalions do infantry live fire training in platoon size.

In today’s training the Karelia Brigade takes advantage of different technological applications to supplement the traditional training methods. Such include for example the EKO-AIMS system, where an assault rifle replica has been fitted with a laser-based simulator transmitter and a target prism that receives the signal, and the NOPTEL firing simulator, where the barrel of an assault rifle is fitted with a laser transmitter and a target prism. The characteristics of the aforementioned simulators support marksmanship training, since with the simulator the instructor can see where and how the trainee is aiming and they can correct the error is the stance or the grip in different phases of shooting, such as the follow-through. In the future the number of simulators will grow as a new indoor shooting simulator is taken into use. The possibilities of this simulator are even wider, all the way to firing exercises comparable to field training and weapon handling exercises on the firing range.

Thus, achieving good shooting skills can be supported with shooting practise simulators. Ultimately, shooting skills are measured in the changing and varied conditions of the battlefield. Using a two-way laser engagement simulation system (KASI in Finnish) supports combat training combat in real life environments with both sides equipped with sensors during the combat training exercises.

A unit receiving feedback after combat exercise that used a laser engagement system.

When using the KASI system each soldier will wear webbing that has prisms attached to recognise the laser beam that is emitted with every shot fired and a laser transmitter is also attached to the weapon. With this combination the round will hit where there soldier is shooting. The opponent’s webbing will recognise the hit and emit a sound to notify the target if they have been killed or wounded. The system also includes simulators for anti-tank weapons, main battle tanks and different infantry weapons. It also enables providing effective feedback all the way from the individual soldier to the larger unit, since the system records the events and they can be later analysed with an instructor. 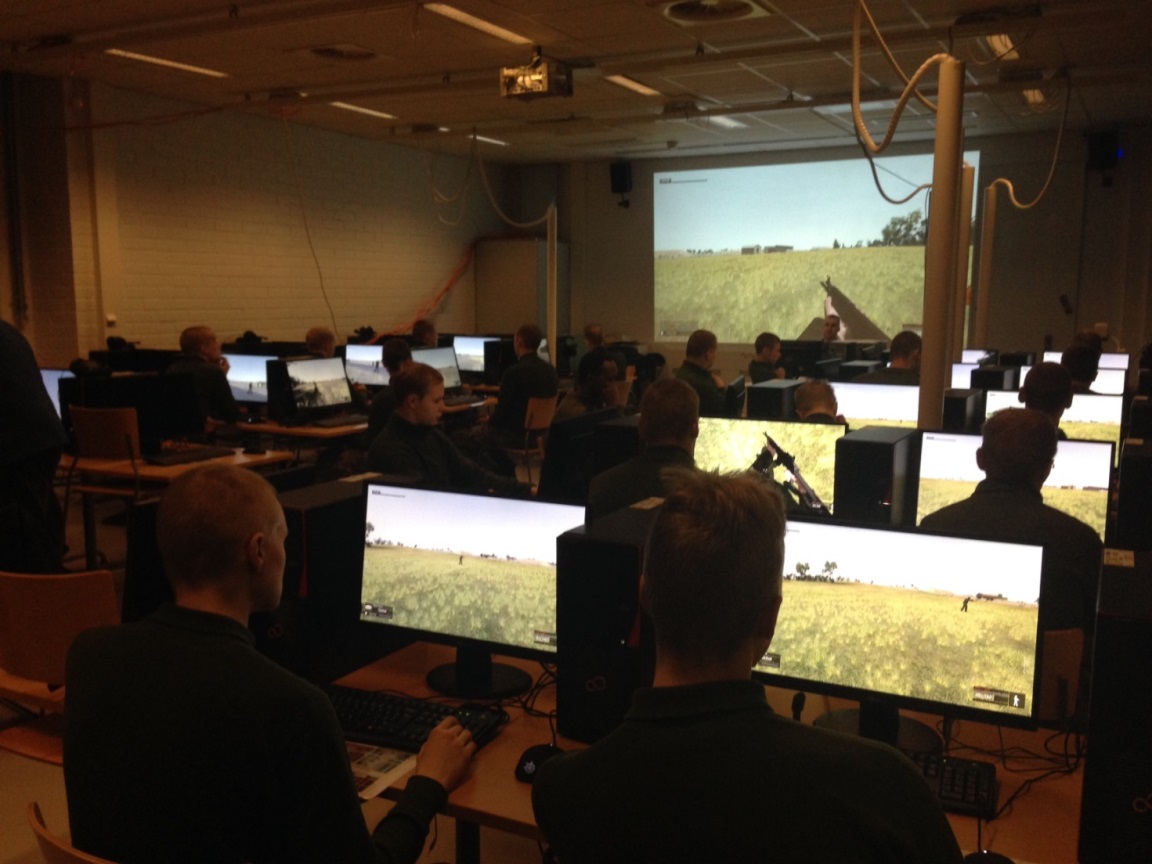 The Karelia Brigade started using the virtual training environment in 2017. It does not enable giving marksmanship training as such but different drills support visualising the environment where the actual marksmanship skills achieved trough physical training will be used. The ballistics properties of weapons have been modelled in detail, for example in terms of penetration capability. These properties cannot be modelled for example with the KASI system, so the virtual training environment provides a cost-effective way of visualizing the weapon effects on various targets. A significant partial factor affecting training results is also, how different learners can be taken into account by using many types of training environments and how meaningful the trainees thing the varying training methods are. Mainly the trainees see well-planned and goal-oriented training in a virtual environment as motivating and rewarding. The effectiveness of the feedback that the environment enables and the fact that the feedback is immediate are undeniably factors that improve the training results. Common, shared successes also create a positive curve the training and so support learning new things.

The most important thing from the perspective of basic training is to train everyone in the fundamentals of marksmanship in the beginning of service. When you have created a solid basis, it is time to move to the firing range to practice. The first range day is still focused on the basics, such as zeroing the weapon, but at the same time the recruits get to fire the first rounds from the prone position. Every moment on the firing range should be effectively used for dry-practise of each phase of firing and then for the firing itself. Also providing feedback when inspecting the impacts is important and correcting the errors of the technique is emphasized. The feedback is given by both the salaried personnel as well as the conscript leaders.

How is the marksmanship training organised in your unit in practice?

How Are Simulators Utilised in the Marksmanship Training of the Company?

The 1 Engineer Company starts using NOPTEL devices as soon as the basics of weapons handling have been learned, during the second of military service. Approximately a section can use the simulator at one time in the company, the the battalion's companies take turns in using the simulator: it is in use almost every night during the basic training period, all the way until the marksmanship qualification test. Training with the system is usually done in the evening under the leadership of the conscript leaders. Sometimes the NOPTEL system has also been used during daytime training, for example if the company is doing training-station type training indoors. We use the system mainly during the basic training period and it makes the company's marksmanship training more effective and makes it easier to develop and improve the individual soldier’s shooting skills.