National Parade on the Finnish Independence Day in Lahti 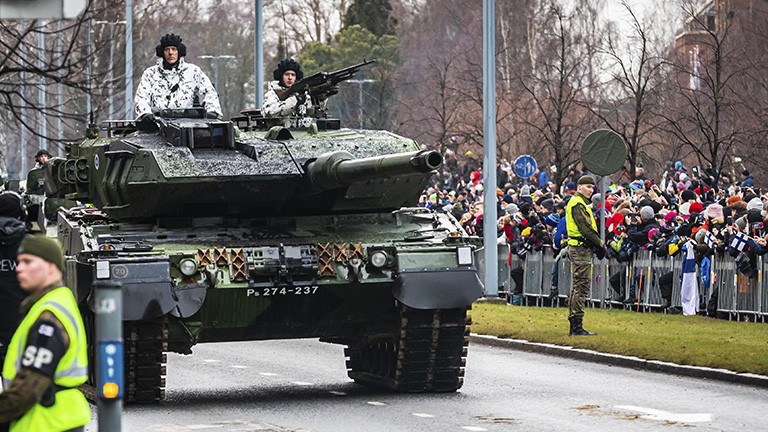 The Finnish Defence Forces will celebrate the Finnish Independence Day by a national parade, part of heritage, in Lahti. The review of troops will take place at Kisapuisto Stadium and the pass-in-review on Vapaudenkatu. The Finnish Defence Forces’ equipment will be on display for familiarisation at Lahti market square. The arrangements of the event will consider the regional restrictions concerning public events to ensure sustained health security.

The parade will incorporate troops from all services, from the National Defence University, Finnish Border Guard, and veterans’ and national defence organisations with the total strength of circa 1,300 persons.

On 6 December, the review of troops will start at Kisapuisto Stadium at 12:00 with the parade troops aligning to position from 11:30 onwards.

The pass-in-review conducted on Vapaudenkatu starting at 13:15 will involve up to a thousand persons, 55 vehicles, and 14 aircraft, as well as a heritage cavalry detachment.

The flypasts of the pass-in-review will feature Finnish Army NH90 transport helicopters and Hughes MD500 light helicopters, as well as Air Force F/A-18 Hornet multirole fighters and Hawk jet trainers. The flypasts will cause noise over the area of Lahti.

The pass-in-review can be observed along Vapaudenkatu. The dismounted detachments marching on foot will deploy on Kyösti Kallion katu, on Lahdenkatu, and at the start of Vapaudenkatu with the phase line on Rauhankatu.

The pass-in-review start line will be at the intersection of Rauhankatu and Vapaudenkatu. The motorised detachment will get into formation for the pass-in-review on Svinhufvudin katu and Kartanon katu.

The parade will be reviewed by Commander of the Army Lieutenant General Petri Hulkko accompanied in the pass-in-review by Mayor of Lahti Pekka Timonen and War veteran, Mr Jaakko Heikinheimo. The review site for the pass-in-review is located at the market square with the phase line on Mariankatu.

The parade troops will be commanded by Deputy Chief of Staff Army Operations, Brigadier General Tero Ylitalo. The field devotional will be delivered in the review of troops by Army Senior Chaplain Sanna Timonen. The parade arrangements remain the responsibility of the Armoured Brigade.

The parade arrangements will take into account the authorities’ health security instructions in force and follow the Finnish Defence Forces’ own corona prevention guidance measures. The Finnish Defence Forces will continue to monitor the coronavirus situation in cooperation with the Päijät-Häme Joint Authority for Health and Wellbeing.

The public is welcome to observe the events of the day. Kindly asked to arrive on site in good time, the public is asked to follow the instructions of the regional health authority concerning public events as well as health secure practice appropriate to the situation, such as recommendation on masking up.

Programme for the day:

Preparations for the parade arrangements will begin on parade locations on 5 December while the parade troops arrive in the area of Lahti Suurhalli, Lahti Energy Arena. On 5 December, preparations will affect both traffic control and parking in all of the area of Urheilukeskus, as well as on Hollolankatu, Svinhufvudinkatu, Ståhlberginkatu, Kartanonkatu, and Paasikivenkatu.

More specific information on the traffic control arrangements will be available during the week 47.

Those looking to attend are reminded that the parade area is a no-flight zone, and drone aviation is sitrictly forbidden for sustained event safety with the exception of statutory authority functions.

It is also possible to attend and observe the parade online on the FDF social media channels and website:

#paraati  #itsenäisyyspäivä
On our social media channels it is possible to follow also other events of the Finnish Defence Forces on 6 December.