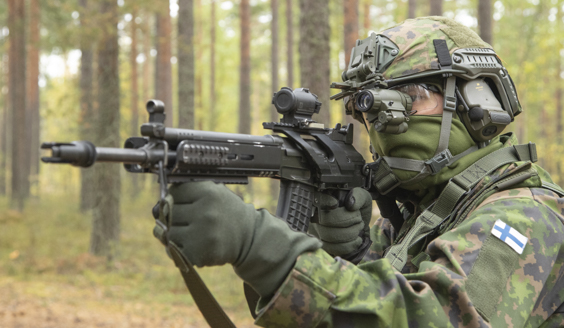 Minister of Defence Antti Kaikkonen has authorised the Finnish Defence Forces’ Logistics Command to sign an agreement on the acquisition of night combat equipment and target acquisition devices from the Finnish company Senop Ltd.

- This new generation of night vision equipment to be acquired is world-class in operating capability and developed by the Finnish Defence Forces in cooperation with Senop Ltd. The project allows the infantry night combat capability to reach a new level which in turn affects training, combat tactics and techniques. As a result, the infantry will have the capability in operating efficiently and effectively in all visibility conditions. It is also remarkable that we sustain this type of high-technology competence in Finland that guarantees security of supply and secures operating capability during times of crisis, Inspector of Infantry, Colonel Rainer Peltoniemi notes.
The procurement acquisitions are part of the land defence development programme and have a central role in developing infantry troops’ capabilities to fight in demanding visibility conditions.

Laser sights are used for aiming the soldier’s assault rifle in the dark when the use of red dot sight is not applicable. In addition, the laser sights are well adapted for purposes of target designating for other weapons and assisting as tactical C2 tools.

Target acquisition device is meant for target acquisition and forward observation. The device with its software allows for firing solution determination, mortar orienting and laying for direction inde-pendent of GPS satellite location as well as increasingly fast and accurate target acquisition in all conditions and at all times.

The products will be supplied by the end of 2021 and fielded from 2022 onwards.

The employment effect of the acquisition is altogether 40 person-years in Finland excluding redeeming the additional procurement provision.

The acquisition of night vision devices relates to the letter of intent signed by the Finnish Defence Forces and Senop Ltd on 22.5.2019.

The Ministry of Defence issued a release on the acquisition on 13.10.2020.