The exercise Kevadtorm 19 will bring to Estonia an altogether 41-person strong Finnish exercise contingent from the Kainuu Brigade, Karelia Brigade and Pori Brigade. This detachment will feature a combat engineer intelligence platoon comprising conscripts central to the exercise activities. As the conscripts to participate in the exercise Kevadtorm, Spring Storm, represent versatile training backgrounds, they undertook preparatory connectivity integration training for coordinating procedures for interoperable cooperating in the Säkylä garrison area right before departing for Estonia.

The Finnish combat engineer intelligence platoon will incorporate in its composition three conscript sections led by service-personnel section leaders. Comprising no designated command element as such, the Finnish exercise contingent will have Finnish staff officers serve in staff positions in the exercise headquarters. Additionally, the combat engineer platoon will be supplemented by Finnish service personnel operating as observer controllers and by personnel responsible for the exercise contingent’s service support and maintenance.

Starting in Estonia with the preparatory phase and taking command phase, the exercise will continue by undertaking CET/FIT training followed by the LIVEX phase. When the LIVEX phase has been completed, the dismantling phase will involve cleaning and decontaminating both troops and equipment to protect against the African swine fever virus. The dismantling phase completed the exercise troops will be on the move to Finland in the respective garrison areas. The duration of the exercise will be 14 days in total.

It was already two weeks prior to the exercise’s start proper in Estonia, that the conscript troops arrived in the Pori Brigade garrison area in Säkylä to undertake preparatory training. The training objective of this two-week training period entailed coordinating the platoon’s procedures by having the troops train, among others, as part of a field training and live fire exercise. This preparatory training also included an in-class session involving familiarisation with the exercise area. According to Commander of the 1st Combat Engineer Company, Captain Jussi-Pekka Niemelä who is responsible for the training provided for the combat engineer intelligence platoon, participating in a combined exercise asks for proper preparing.

– Here in the Pori Brigade we implement the Training 2020 Programme which impacts on planning conscript training between these three brigade-level units. This in turn translates into a great deal of planning and double-checking that usually would not be applicable while preparing for a national training exercise.
And it is the duration of the exercise that makes it differ from what the conscripts are used to as they need to be able to sustain their operating capability throughout the entire exercise.

Meanwhile, when preparing for a combined exercise, logistics arrangements also assume a major role. This is evident, for instance, in what needs to be accounted for relating to actual packing and traveling. Apart from this, additional administrative procedures involve practicalities such as conscript vaccinations, European Health Insurance Cards and passports. Furthermore, the conscripts need to give their consent to partake in a combined exercise. Moreover, when border-crossing into another nation’s territory as a military training contingent, it is necessary to submit well in advance lists of weapons equipment as applicable.

– Now compared to how at home it is enough just to submit the lists of names and exercise equipment on the morning of departure, all must be done so much earlier when attending a multinational exercise, Captain Niemelä explains.
In addition, the training exercise area in Estonia will be much more extensive than the training grounds that the conscripts are used to utilising. This will only be beneficial, as to Captain Niemelä, because Estonia avails of a well-organised CIMIC concept for conducting civilian and military cooperation to ensure that foreign exercise troops are kept out of no-go areas and refrain from causing unnecessary disturbances to overall functions of society.

The exercise troops’ expectations will remain high as the combat engineer intelligence platoon gets to undertake training as part of a major exercise, and the subsequent intelligence produced will inform, among others, decision-making procedures and the exercise continuation. As attending a combined exercise will allow for interacting with other troops, it is possible to verify the competence proficiency level of Finnish conscripts compared to that of professional soldiers.

– Observations will inform judgment and enable further development. In any case, participating in this type of an exercise will greatly benefit all personnel involved, Captain Niemelä summarises. 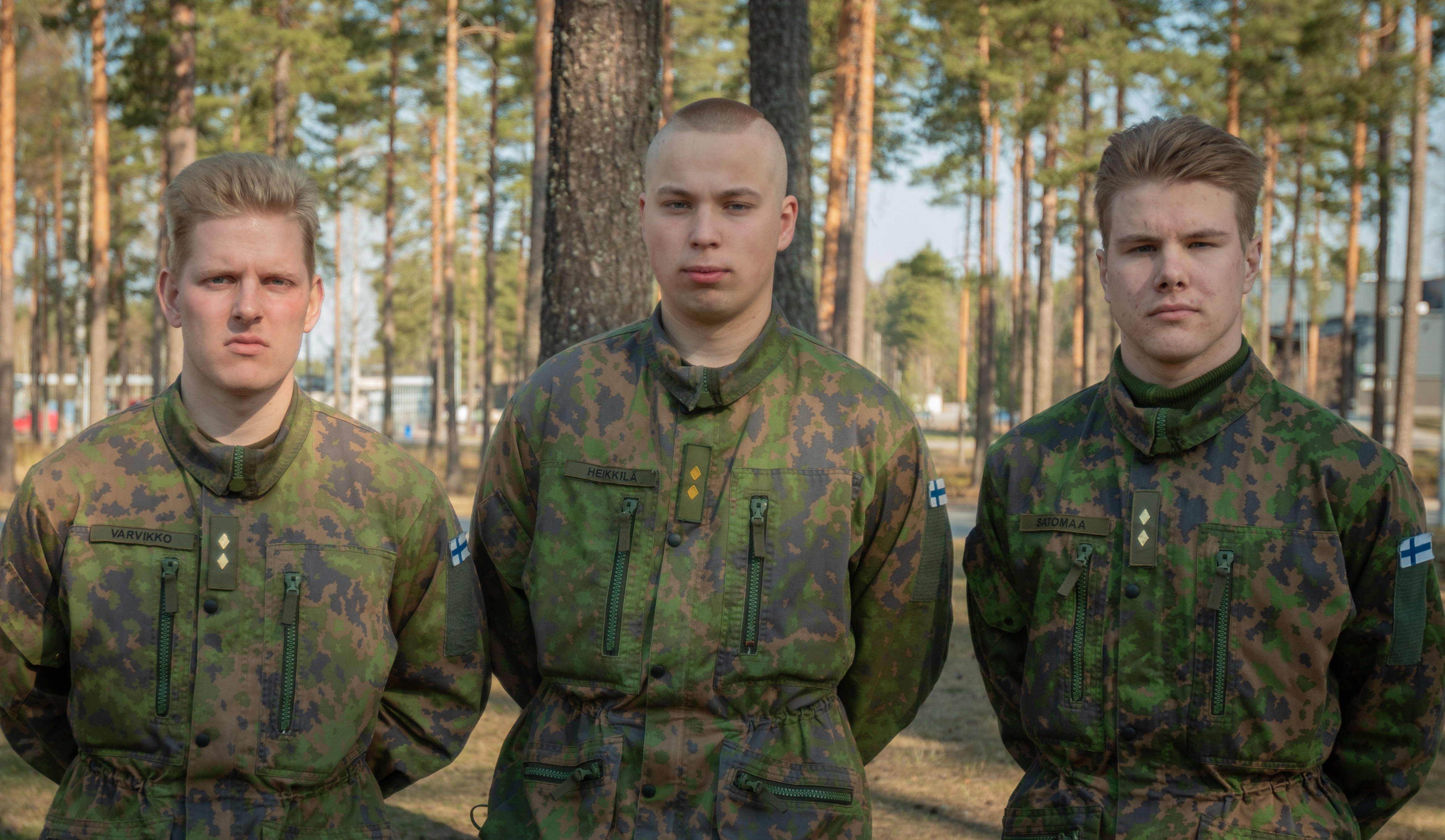 Leading lessons from an international field

– So far we’ve done very little as a platoon comprising three sections, and this exercise requires that the platoon does work well together. This is also why this exercise will be a good measure for how well the platoon actually operates in reality. And this all will be a brilliant thing if the exercise goes well and everything runs smoothly, the three Officer Candidates explain continuing each other’s line of thought.
The key benefits of the exercise focus on conducting multinational cooperation and experiencing new terrain types. Seeing other troops’ versatile operating procedures will allow for learning a new thing or two. This reference point will also enable generating trust in one’s own operating.

– Both new terrain types and engagement in a lengthy exercise presuppose that the sections sustain their operating capability. And the multinational dimension will make everything just a tad bit more challenging. We all need to leave our comfort zones, and it will be only following the exercise’s end that we will actually get to know how it all went. Of course it’s great to be able to operate outside the box, and we are all very excited to be part of this exercise, the Officer Candidates say.

Serving as conscripts, the Officer Candidates knew very little of the exercise in advance. However, when the platoon leader issued an order, the three became somewhat more knowledgeable concerning the exercise’s actual contents. Yet, with no details on how the two-week exercise programme will pan out as such, all sorts of surprises are very likely to surface.

– Challenges keep us going and following through, one of the Officer Candidates concludes.