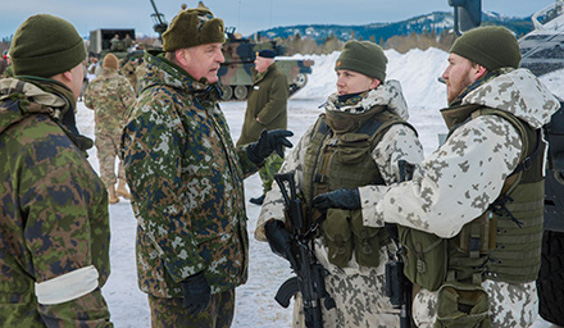 The main exercise phase began on the preceding midnight of the visit.

- The plans made seem to materialize as wanted and the exercise all in all looks excellent.

- The troops have a good spirit and equipment. Furthermore, it appears that our army land warfare doctrine fits to this kind of environment as well, Toivonen adds.

The weather conditions of the winter exercise Cold Response vary almost daily this year. It fits well regarding the objectives as the cooperation skills of the troops as well as the interoperability between the partners is being tested. According to Lieutenant General Toivonen, the exercise Cold Response is one step in a longer development process.

- There are multiple levels in this exercise: the first objective was to establish and deploy units conform to the Finnish crisis management concept, and it went well. Secondly, our goal is to enhance the operational capabilities of the troops in challenging conditions. Additionally, as we are in the same battalion with the Swedes and Norwegians we have the multinational and especially Nordic dimension present in this exercise.

- When considering these three objectives we have an excellent exercise ongoing. And for what I have seen so far, I can already estimate that we are able reach our goals. 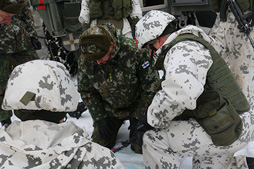 In the exercise the Finnish contingent forms a battalion reinforced with Swedish and Norwegian companies. The Finnish-led battalion functions within the brigade led by a Swedish commander. The rest of the troops in the brigade are mainly Swedish. According to Toivonen, the exercise Cold Response is one of the most important exercises to the Swedish Army this year.

- In that sense it is also good that we are here training together.

In the view of the future activities, Toivonen sees this year’s Cold Response as one step forward.

- We are developing our activities comprehensively with Sweden. The goal is to build a multi-level brigade frame including overall activities of the brigade, the interoperability of the units and the different support arrangements.

- This is a project that lasts several years and the exercise Cold Response provides us an excellent experience of how the battalion level functions as a whole.

Lately there has been a vivid conversation in Finland regarding the international exercises of the Defence Forces. Toivonen highlights the importance of the exercises for developing the Army and its activities.

- Preparing for the crisis management missions as well as testing one’s own capabilities is present day. A genuine and comprehensive development requires cooperation.

- For us it is important to train with countries that we are able to learn from and with whom the cooperation generates mutual results.