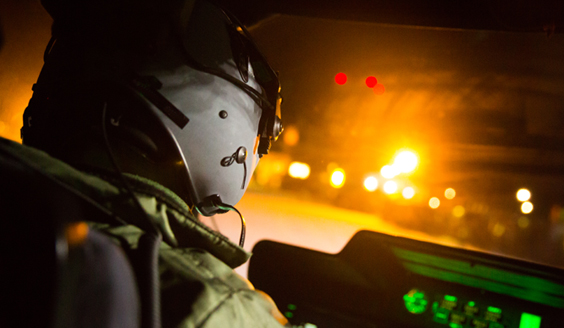 The significance of night flight capability continues to be on the increase as regards operating on national and international missions as well as while conducting helicopter operations in cooperation with other authorities. By the same token, the training focus in the training of Army helicopter crews has shifted towards emphasising night flight training in particular.

When conducting military operations, the observability of a helicopter is obviously lower at night and in poor weather conditions than it would be in day light. Similarly, in conditions of low visibility, helicopter countermeasure influencing tends to become increasingly difficult. Operating in the dark enables employing the element of surprise that in turn will raise the expected success probability rate of a mission in a given situation.

It remains mandatory to sustain the capability for conducting the set missions relating to providing round-the-clock support to other authorities. This means that increased night operating capability will support overall society during peace time as well. For instance, while conducting search and rescue missions, the optimal combination for operations is a well equipped helicopter and a capable crew. The Utti Jaeger Regiment’s Helicopter Battalion sustains readiness for providing inter-authority support around the clock.

The type of night vision equipment utilised in the Finnish Defence Forces’ helicopters is denoted by the term Night Vision Device (NVD), whereas the helmet-mounted binocular-looking gadget is referred to as Night Vision Goggles (NVG). Moreover, the NH90 transport helicopters avail of a Helmet Mounted Sight and Display (HMSD) that provides the helicopter pilot with an image-intensifier projection as well as a display of the flight instrument data projected overlaid on the visor.

Allowing for surveillance and monitoring in challenging lighting conditions, the technology utilised in night vision equipment draws from amplifying the scarce light available at night to become optimally discernible for the human eye. Calibrated for amplifying the discernible light and converting near infrared light spectra otherwise invisible to the naked eye to the particular light spectral distribution range of the visible light wavelengths, the resulting image-intensifier output will then equal bicolour image projections that usually feature a variation of the shades of green. 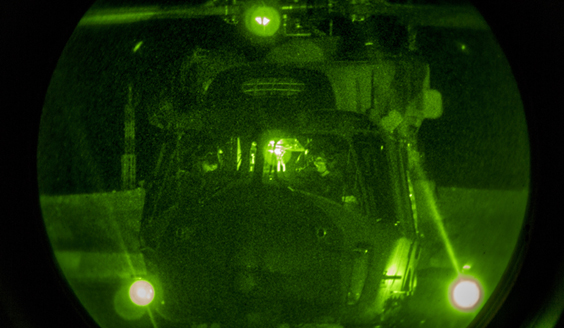 While employing optical light amplification, the image-intensifier projections of the given targets on the visor reticle become discernible only via the discernible differences in the light spectral distribution levels. This weak discernibility of details combined with difficulty in distance estimation accuracy make the pilots rely on the cockpit’s flight instrument systems while operating a helicopter. Since a pilot’s field of vision remains narrow, aligning the eyesight takes practice at first while the angular range of the vision remains limited.

The cadets undertaking Army helicopter pilot training will begin night flight training while still undergraduates in the National Defence University. Utilising MD500 helicopters, the HH1 flight training programme has the students first familiarise with operating in the dark without relying on night vision device and utilise visible lights illuminating on the ground instead. During this initial training phase, the students learn to utilise the flight instrument data and internalise their importance in sustained situational awareness while operating in the dark.

After graduating and promoted to the rank of Lieutenant, the Army helicopter pilots continue on the HH2 flight training programme that aims to train helicopter pilots in operating with Night Vision Goggles safely and effectively while piloting MD500 light helicopters. This involves mastering helicopter basic flight maneuvers, helicopter handling in case of emergency and landing in terrain as well as navigation with NVGs.

The night flight training continues with the operating of NH90 transport helicopters equipped with modern systems enabling operating in nearly all weather and lighting conditions during all times of the day. The NH90 simulator allows for hands-on practice followed by operating an NH90 in the dark either by utilising traditional NVGs, or the system-integrated HMSD helmets that allow the pilot’s line-of-sight from the cockpit as well as a display of the flight instrument data projected overlaid on the visor. 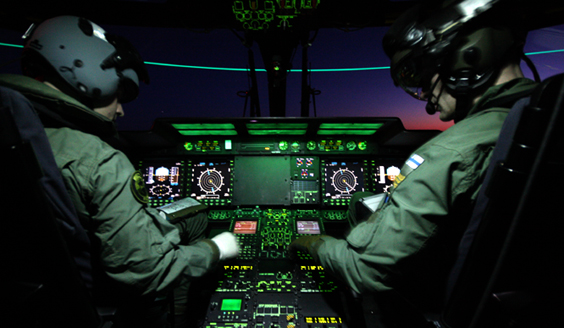 The night flight training then progressively advances from operating a single NH90 transport helicopter to the activities of a helicopter flight detachment comprising a number of helicopters. The methods for night flight operating differ from those employed in daytime which means that helicopter crews need to pay specific attention to mission planning and execution. While operating major detachments in varying formations, the methods employed must be familiar to and internalised as applicable by all the given detachment’s helicopters and respective crews.

Participating in versatile military training exercises over the entire territory of Finland every year, the Utti Jaeger Regiment’s helicopters also provide support for the training of other security authorities and, if the situation requires, conduct the set missions. Exercise-related flight activities may take place over towns, built-up areas or sparsely populated areas around the clock.

Organised over the designated training weeks as scheduled, the spring term night flight training tends to start after mid-January to be finished by the end of April only to resume again after the light abounding summer is over by the end of August to continue until December. During the set training, flight operating activities begin right after nightfall and close once the daily waves are completed.

As such, night flight training aims to produce helicopter crews with sufficient readiness for accomplishing the set missions in all prevailing flight conditions - including in the dark of night. 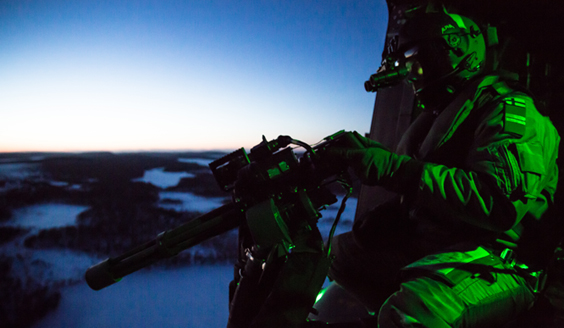