Organising Finnish Rapid Deployment Force (FRDF) training for conscripts, the Pori Brigade ensures that everyone who has undertaken the FRDF training is offered an opportunity to attend an international exercise either in Finland or abroad. This particular exercise Kevadtorm 2017 in Estonia has enabled a Leguan bridge-laying vehicle section of Finnish reservists to train in a multinational operating environment.

For the combat engineering platoon of Finnish reservists reinforced by a Leguan bridge-laying vehicle section, participation in the main annual exercise of the Estonian Defence Forces, Kevadtorm 2017, has involved getting down to the action. With approximately 9000 participants, this multinational exercise offers versatile opportunities for training as part of a major composition.

- This exercise has been very good for our platoon and we have succeeded very well. Our training and missions have gone like planned so far. Even if the terrain and conditions themselves are similar to Finland this exercise differs from earlier exercises because now we are fighting together with multinational troops and there is another multinational brigade as an opposing force, too, says corporal Aleksis Villanen. 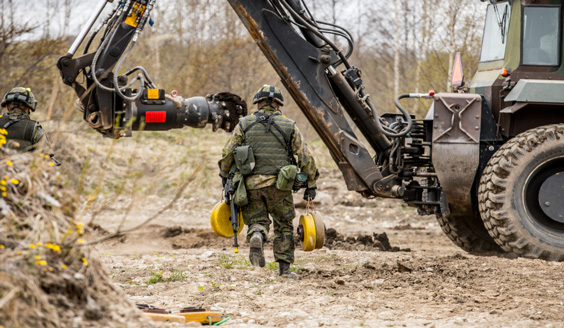 Finnish reservists are skilled and sustain their motivation

The FRDF training of the combat engineering platoon has involved, for instance, advancing mobility and counter-mobility operations. Furthermore, the platoon has honed their military skills in operating in a multinational operating environment, such as, for instance, managing riots and international signals activity. Since the majority of the training activities has been organised in English, now the combat engineers are fully capable of utilizing their competences developed most optimally.

- In this exercise there are other nationalities, troops, strategies and ideas. It is interesting to see how other troops from different cultures cooperate with us and what kind of procedures they have. I really look forward to have possibility to participate in this kind of exercises some day again, says corporal Juhani Juujärvi. 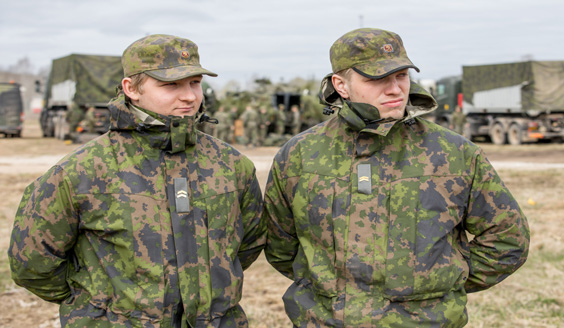 As regards combat engineering, participation in the exercise Kevadtorm 2017 brings added value for the purposes of developing tactical and technical procedures as well as FRDF training procedures.

- The primary objective of our participation in this exercise is sustained interoperability with other combat engineer troops concerning tactical and technical procedures as well as with both the units supported together with the multinational force. These experiences accrued will then eventually become further applicable once we prepare for attending other international exercises. In fact, our next international training session, the exercise Saber Strike, is going to start here in Estonia already in a couple of weeks’ time. This current year we train with combat engineering platoons in international exercises, and next year our goal is to attend a multinational exercise with a combat engineering company, says Lieutenant Colonel Tero Savonen, Commander of the Satakunta Engineer and Signals Battalion of the Pori Brigade.