From 28 November to 2 December 2019, OSCE observers from the participating states of the Organization for Security and Co-operation in Europe visited the exercise Kaakko 19. Altogether 18 OSCE observers familiarised with operation and troops of the main exercise of the Finnish Defence Forces. According to Head of OSCE Military Observer Mission, Lieutenant Colonel Peeter Kõiv from Estonia, the observation visit proceeded well, and, on an European Song Contest scale, the end outcome translated into "Finland, 12 points".

- Finland has demonstrated willingness to be open and transparent in organising field training exercises as well as determination in developing the observation arrangements. By the example set here in the exercise Kaakko 19, Finland raises the level of the OSCE observation visits, Lieutenant Colonel Kõiv explained.

- We received answers to our questions and ended up learning a lot about the Finnish system of national defence, Lieutenant Colonel Kõiv expressed the thanks of the observers. 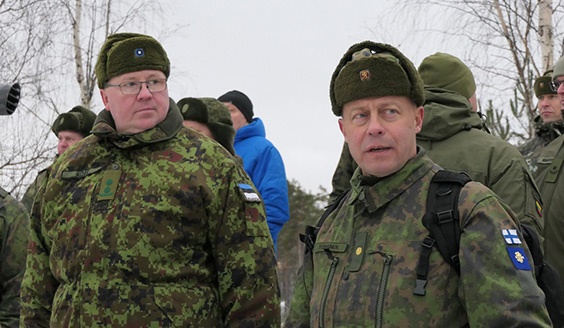 OSCE observer from Estonia, Lt Col Kõiv, and leader of the Finnish host state team, Maj Toivanen during the observation visit to the exercise Kaakko 19.

- All is well as long as observation and observation visits are conducted in accordance with the Vienna Document, OSCE military observer from Germany, Lieutenant Colonel Hayko von Rosenzweig pointed out.

This refers to how the exercise organising host state can demonstrate a given military activity to be a non-threating one by verified abidance to the obligations and opportunities included in the Vienna Document 2011. 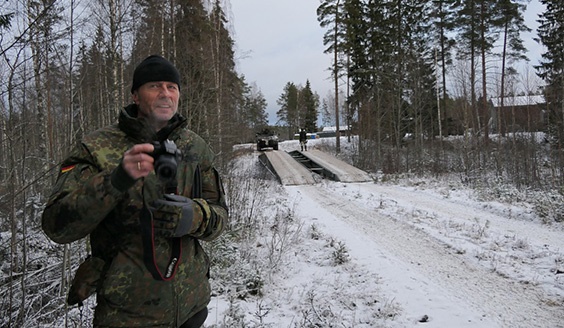 - Although the number of troops in the exercise Kaakko 19 remains below the threshold for being subject to mandatory military observation, we want to increase confidence and trust between nations by organising this voluntary observation visit, Host of the OSCE observation visit, Finnish Army Chief of Staff, Major General Markku Myllykangas said.

According to Major General Myllykangas, this observation visit offers the OSCE observers an excellent opportunity to meet in person reservists, conscripts as well as service personnel of the Finnish Defence Forces.

Interest in the Finnish reservist system

Despite the good end outcome, there is always room for improvement. For instance, more information on the system of liability for military service and reservists was deemed necessary, as no identical system exists in this exact same form in the other OSCE participating states. During the observation visit, the OSCE observers familiarised with the notion of liability for military service and then had an opportunity to talk with reservists and conscripts in the midst of the LIVEX phase when the Finnish soldiers were taking a break. 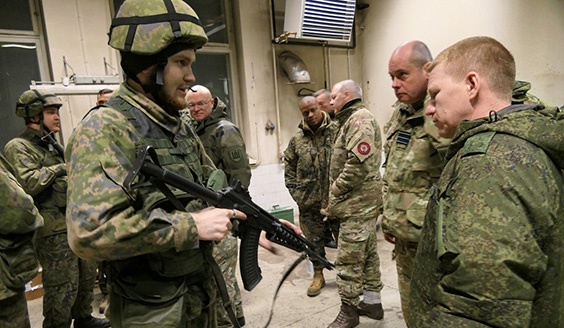 FDF reservist explains details on their firearm, equipment and gear to OSCE observers from the UK and Russia

The OSCE military observers seemed to be particularly interested in the duration and quantity of refresher training exercises. The answer to this would obviously be dependent on the given reservists and their particular skills and competence. While enagaged in resfresher training exercises, the reservists’ skills acquired in the given civilian area of expertise become utilised so that the domains of national defence and civilian life mutually support each other.

Long days instead of staged performance

Packed with efficiently long days as fit for a military observation visit and as planned by the hosts, the daily programme included site visits to varying destinations and troops that ran from 7 a.m. until 10 p.m. and thus enabled the observers to accrue as much relevant information relating to the exercise as possible. During this observation visit, meals were served in the field and on sites to save transfer time. The military cultural contribution on the programme equaled a guided tour in the Military Aviation Museum hosted by a former Finnish Air Force test pilot Jyrki Laukkanen at the Kymi Airport. 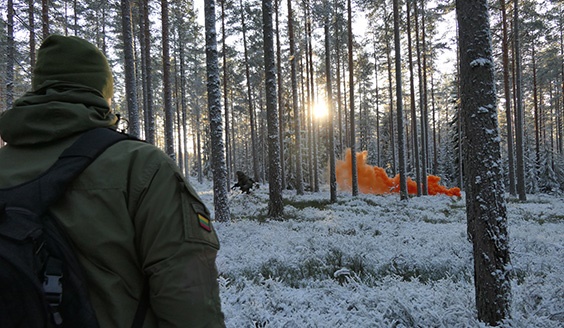 Rather than involving staged performance or military shows, the programme for the observation visit catered for verifying the type of activity that was ongoing at a given point in time when the observers showed up on site. At times, this meant waiting in the field rain or shine as the exercise O/Cs and instructors figured out the exact location of the given troops engaged in combat. During the observation of CQB in blank ammunition fire, the observers and hosts wore ear protection and avoided safety incidents.

During the LIVEX phase, the mere presence of the observers combined by presenting the setting by resorting to English may generate additional pressure to the exercise troops in combat and to the service personnel. However, the OSCE observation and observation visits remain significant as regards multinational treaties and the big picture.

"Arms control measures may equal a burden on the brigade operating level, but remain significant politically and strategically."

Arms control measures, observation, openness and transparency contribute to confidence generating between nations and this in turn results in reducing any potential mistrust. The OSCE and the Vienna Document aim to increase security. 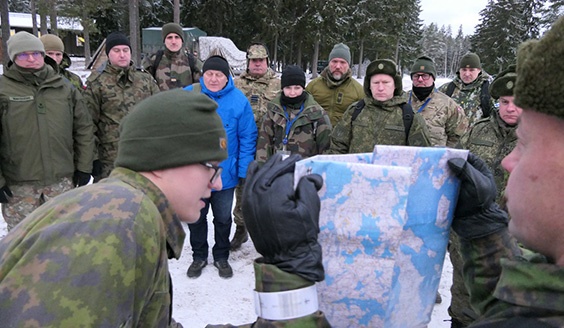 - In the near future, Finland will organise major observation events including an air base observation visit next at the Lapland Air Command followed by a visit to the Jaeger Brigade in May 2020, Leader of the host state team on the observation visit, Senior Staff Officer Arms Control, Major Arto Toivanen from the Defence Command described.

In accordance with the Vienna Document 2011, Finland organised this observation visit on a voluntary basis as the exercise Kaakko 19 incorporates up to around 12,000 persons at a time. If the number of troops equal or exceed 13,000, it remains mandatory for the exercise organising host state to arrange for the OSCE observation. As for voluntary observation visits, the exercise organising host state gets to make the decision as to which nations to invite. The Vienna Document recommends extending the invitation to include neighbouring nations in particular as well as those OSCE participating states that may be interested in a given exercise. When a major exercise is subject to OSCE observation, all the 57 OSCE participating states are to be invited for observation.

In total, altogether 18 OSCE observers visited the exercise Kaakko 19 from 11 OSCE participating states with a maximum of two persons in a given delegation including the Denmark, Estonia, France, Germany, Lithuania, Norway, Poland, Russia, Sweden, UK and the USA. 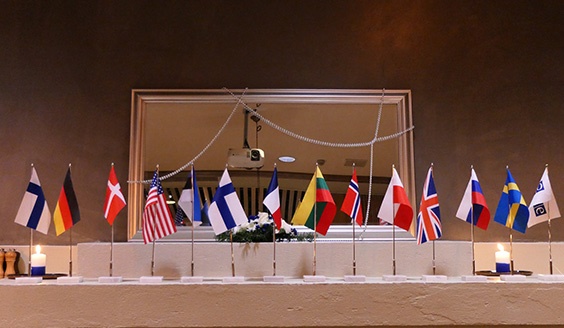