In the autumn of 2018, Staff Sergeant Stefan Peltonen from the Norrbotten Regiment, Boden, Sweden, began his assignment in the Army Academy, Lappeenranta. For a full year, SSG Peltonen will undergo familiarisation with Finnish non-commissioned officer training both in the capacity of a student and that of an instructor. Part of bilateral defence cooperation between Finland and Sweden, FISE, this year-long assignment will fit in on the continuum of defence cooperation ranging from coordinated training exercises to a number of courses organised.

SSG Peltonen is the first ever non-commissioned officer from Sweden to serve in Finland as an ‘exchange student’ and as an ‘exchange instructor’ for such a lengthy time period. Obviously, international instructor and student exchange overseas has taken place also before but, until now, only on the commissioned officer level and on significantly shorter courses. SSG Peltonen will be first serving in the composition of the Military Engineer School of the Army Academy, and then, in early 2019, transfer to the Infantry School of the Army Academy to return back to Sweden in the coming autumn of 2019.

- Basically, I observe how students are being instructed and what the training involves. By now I have already been involved in conducting counter-mobility measures in Kajaani. Later on, this will be followed by participation in fortification measures and mobility advancement, SSG Peltonen says.

- Although instructing practices and ways of doing things differ slightly, I will take look at this all by focusing on a slightly bigger picture. This means that I’m interested in how overall NCO training and the NCO training system function here in Finland.

- For instance, the differences have to do with mine obstacle construction and counter-mobility measures, planning, as well as section leader commanding in a given situation, SSG Peltonen points out.

- Here in Finland these measures seem to be slightly more structured. Everything seems to be done with slightly more exactness. In Sweden we appreciate preciseness as well but we don’t expect everything to be exactly so even to the tiniest detail.

Moreover, SSG Peltonen has also paid attention to the differences between the contents and emphases in Finnish NCO training compared to its Swedish counterpart. This is, the Swedish NCO training system only features one basic-level training course, and its follow-up level will then target those intending to graduate as Master Sergeants. In Finland, the four-tier NCO training system incorporates the following phases:

All of these NCO training levels set graduation as the prerequisite for becoming qualified for the ensuing promotion.

- We could adopt the well-functioning parts of the Finnish NCO training in Sweden as well, SSG Peltonen comments.

- I think we need a Finnish type of NCO training system in Sweden in that each NCO task level would then be supported by bespoke training. This ensures that each individual soldier who advances in rank will always be qualified for the given position. 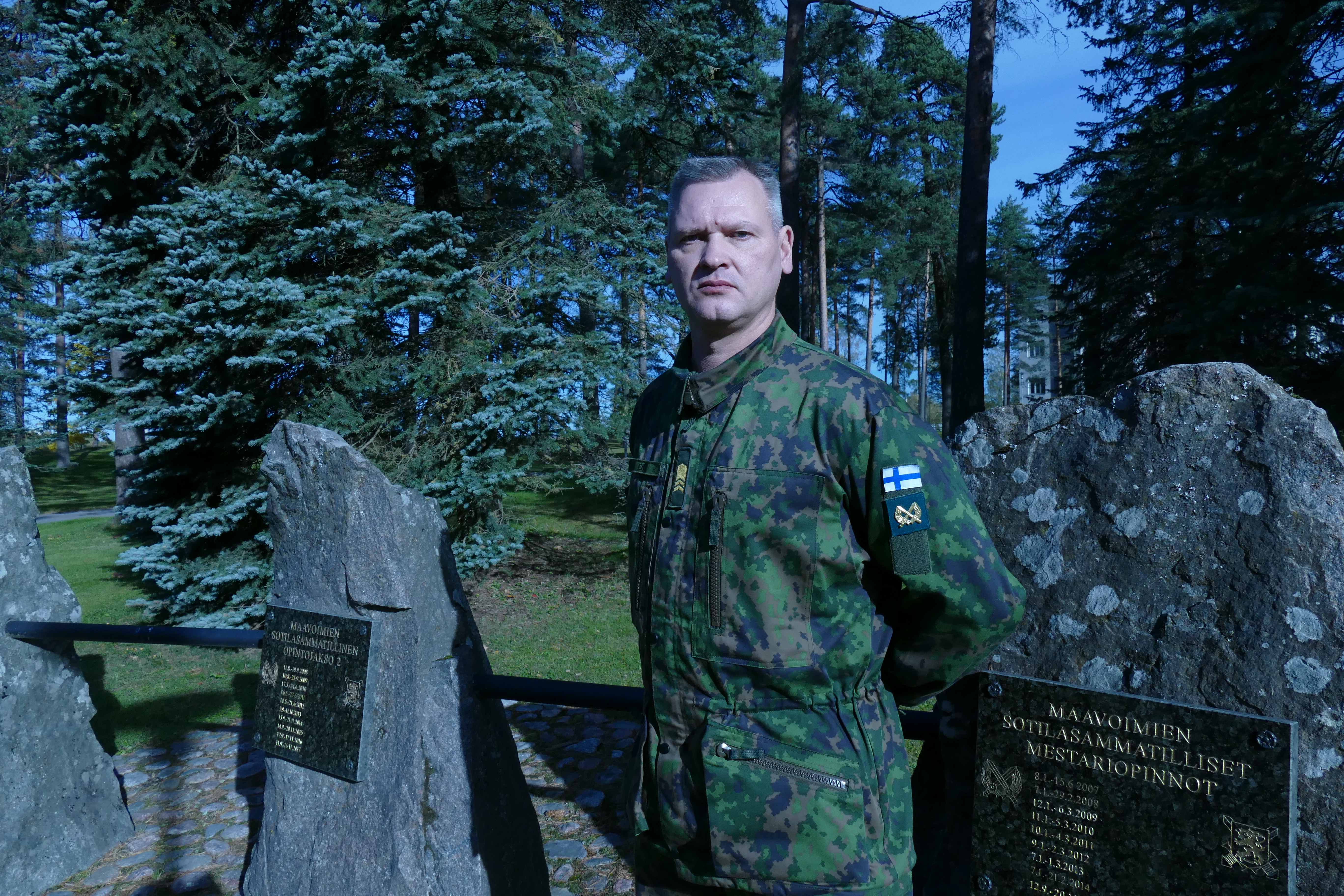 Both cooperation partners benefit from having soldiers become familiar with the training systems implemented by a partner nation and undertake training therein. Being exposed to new perspectives will allow for getting new ideas and developing the prevailing practices. At times, even most meaningful matters may have become somehow forgotten and thereby overlooked altogether.

- This may aid in getting the mojo back and working again. Rather than focusing on ‘shoulds’, we need to pay attention to how things could be done, as SSG Stefan Peltonen puts it.

This learning process is mutually beneficial.

- We will learn from Stefan as regards the Swedish practices, and he in turn will learn from our procedures, Senior Staff NCO, SGM Esa Ek from the E&TC of the Army Academy points out.

If we at any point need to become brothers in arms, we have to learn from each other’s procedures and sustain cooperating, Ek continues.

According to SGM Esa Ek, the training objective is that, in the year 2020, a Finnish NCO would take the Mastership level NCO studies in Sweden. The entry requirements include proficiency in Swedish, suitable educational background as well as experience of serving in the FDF complemented by the applicant’s own motivation to undertake the ten-month training course in Sweden.

Language proficiency as a major challenge

The most prominent challenge in the cooperation and training exchange between Finland and Sweden boils down to lacking foreign language skills, Command Sergeant Major, CSM, of the Regiment, SGM Christer Reimertz from the Göta Engineer Regiment, Sweden, explains. He was familiarised with the FDF and the Army Academy in October 2018.

- In our regiment, we lack both training organised in English and instruction material available in English, for all implementation is in Swedish, CSM of the Regiment, SGM Reimertz says.

As for SSG Stefan Peltonen with family heritage in Finland, the Staff Sergeant remains fluent in Finnish that is his first language. As a citizen of Sweden and born and educated in Sweden, SSG Peltonen overcomes any obstacle relating to lacking language skills in the defence cooperation between the two nations.

- In my own brigade-level unit, the Norrbotten Regiment, only a few soldiers are proficient in Finnish, SSG Peltonen describes.

- Whereas in the Göta Engineer Regiment soldiers sustain neither speaking nor comprehension skills in the Finnish language, CSM of the Regiment, SGM Reimertz says.

Technological and functional challenges may come up along the way. Yet, these challenges can be promptly overcome.

As the two neighbouring partner nations operate somewhat different training equipment, both technological and functional challenges may come up along the way. Yet, these challenges can be promptly overcome.

Finland and Sweden continue to have more in common than what any of the apparent differences would amount to. Military training procedures feature no significant differences. And there are plenty of defence cooperation activities between the two nations.

- Cultural customs and ways of thinking seem to be somewhat identical both in Finland and Sweden. We share a long history together and are kinfolks’ nations. We tend to view the world similarly and do things the same way, SGM Reimertz says. 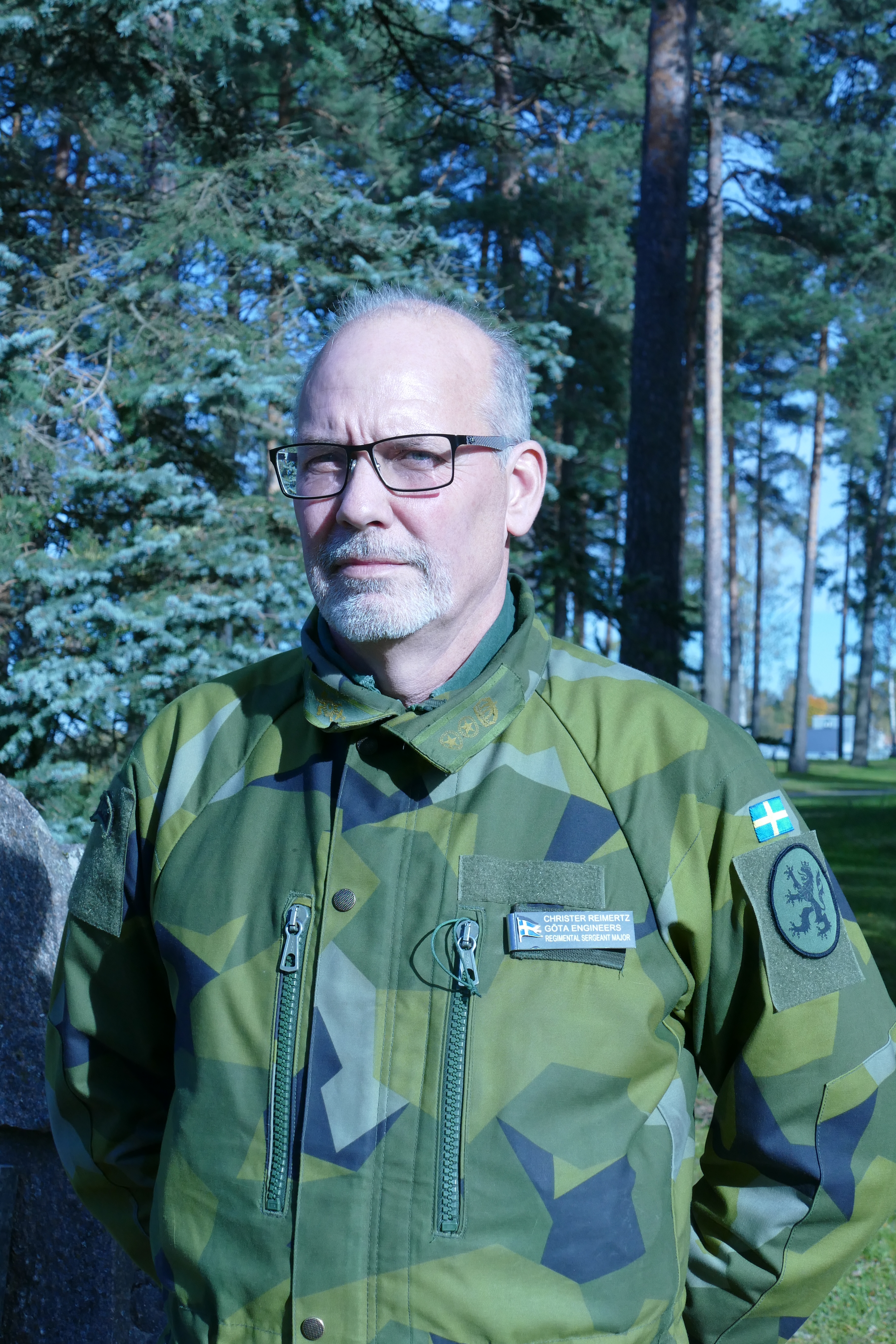 In the future, international cooperating will be on the increase all over the place, including in the field of defence. And the Army Academy courses available for international attendants will become more versatile and it will be possible for Finnish NCOs to apply to study overseas.

- It pays off for each Finnish NCO serving on active duty to give a thought to applying to study on an international course on the grounds that it is highly likely that at some point during one’s active duty career one will be involved in multinational cooperating efforts, Senior Staff Sergeant SGM Esa Ek points out.

Abiding by the Swedish regulations

When on leave, SSG Stefan Peltonen from the Norrbotten Regiment may visit Sweden or travel across Finland. In addition, he is supposed to partake in Swedish training exercises organised in Sweden.

And it is highly likely that SSG Peltonen will also spend a major bulk of his time off here in Finland as well. After all, SSG Peltonen applied for this training exchange to advance his active duty NCO career and also to be with his Finnish girlfriend living in Finland.