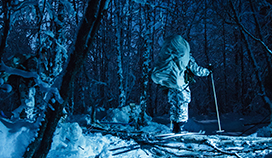 The Jaeger Brigade's vision is that in 2020 it is an internationally known and respected centre of excellence for Arctic training.

This means that the brigade trains its own personnel, including conscripts and reservists to operate in the demanding Arctic conditions of Lapland, it provides training and expert support to other Army units in arctic training, as well as to units of the other Services upon request, and furthermore, it offers our international partners a possibility to participate in the Arctic training courses organised by the Jaeger Brigade and for the brigade to send its own personnel to other countries' similar courses or exercises.

Almost all of Finland and parts of the other Nordic countries are classified as belonging to the subarctic climate group; it typically has cool summers and cold winters. Especially in Lapland, during the winter months the temperature can drop down to -40 degree Celsius, the snow depth is approximately one meter and around Christmas and New Year there is practically no daylight. Despite these distinctive characteristics, military activities cannot stop during the coldest time of the year, but they need to be adapted to the conditions.

And that is the crux of the matter: the training of the individuals and unit, their equipment, and most of all their attitude, must be such that the military activities: readiness, operations, exercises and daily training, still go on. Another part in this rather peculiar operating environment is the vast area of operation that is Lapland: most on it is uninhabited and trackless wilderness with large areas of marshland and bodies of water scattered here and there.

At the moment, the arctic training organised by the Jaeger Brigade consists of winter conditions training for both personnel and conscripts, and of survival or SERE training. On courses for salaried personnel the Jaeger Brigade primarily always trains its own junior training instructors to ensure they have adequate skills for the environment, but it also offers courses for other Army units and military educational establishments as well as other partners.

The winter warfare basic course, which trains salaried personnel, focuses on individual, fire-and-manoeuvre team and section operations. The week-long training phase covers such topics as correct use of layered clothing in varying winter conditions, acquiring liquid and food, making fire using temporary equipment in the winter, protection against cold injuries and maintaining the ability to function in cold conditions. Furthermore, the students receive weapons and marksmanship training for winter conditions and practice cross-country skiing and using an all-terrain vehicle.

In the second, live-exercise phase which lasts slightly less than a week, the participants operate as a platoon and execute simple tactical combat tasks. In the live-exercise phase, in addition to the elements the students also face an opposing force unit. The course has been organised with this programme in the Jaeger Brigade since 2015 and it has had 30-35 students annually. The language of instruction on the course is English and students from the United States and Sweden have also participated on the course.

SERE is an acronym of the words Survive, Evade (or Escape), Resistance, Extraction and it refers to the different areas of survival training that are described in the table below:

The approximately week long SERE B course is an intensive course for conscripts and personnel. The students are trained in the SERE topics through various classroom activities, practical exercises and an applied live exercise phase. Also on this course, in addition to the elements the students face an opposing force unit.

The Jaeger Brigade organises SERE B training for its own conscripts in the spring and in the autumn as the only unit in the Army. The students of this course are mainly reconnaissance trained conscripts, since it has been determined that they need the skills taught on the course the most while operating in Lapland.

The SERE B course for personnel will also accept students from other Army units based on their needs and requests. This course has been in the training programme since 2015.

The Jaeger Brigade will systematically continue developing its knowledge and courses in the field of arctic training both now and in the future. This is done by training the brigade's own personnel on these courses as extensively as possible and by close cooperation and instructor exchanges with, for example, Swedish and Norwegian winter and SERE training centres. The goal is to also increase cooperation with other Services in the Finnish Defence Forces and with the Finnish Border Guard.