Arctic Training - the Bedrock of Capability in Lapland

With its set vision fixed on becoming a training centre of excellence for arctic training recognised and appreciated both at home and overseas, the Jaeger Brigade has already met this objective on the basis of the national and international interest accrued.

This said, there still remains work to do as it never pays off to become too self-satisfied. Rather, as always, a lot can be developed and improved as regards performance.

The question may well be posed as to which extent the arctic combat skills must be part of bespoke training activities in the first place, since after all, every Finn masters these skills anyway. However, in the context of two contingents of conscripts undertaking military training on a yearly basis, the answer to this question remains a definite yes. In fact, military history abounds in examples of how a force more competent in operating in special conditions ended up defeating an opponent more substantial in its strength but less skilled in the particular prevailing special conditions. In the past, Finland’s field army received kudos for its performance in winter combat against a vastly superior opponent. Yet, it is often forgotten that during the Winter War alone the Finnish troops sustained significant losses to frostbite that then ended up affecting the strength of a division in total. At the time, preparedness for facing the harsh winter conditions was lacking and to an extent this is still applicable even today. Although the equipment and gear have undergone obvious development over the past eight decades, overall urbanisation has resulted in weakened survival skills while operating in nature. 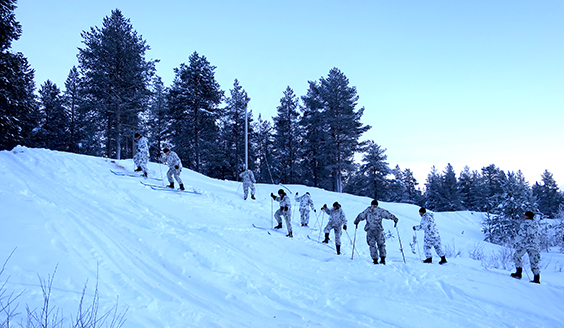 In terms of climate zones, nearly all of Finland’s territory is by definition subarctic and characterised by chilly summers and cold winters. The process of global warming is not likely to change any of this in the immediate future despite this past summer of 2018 having sported record-high temperatures also here in Lapland. During the winter months, the temperatures may drop down all the way to -40 degrees Celsius or below. Similarly, the snow cover depth is approximately a metre over extensive areas, and, at the turn of the year, only a moment of daylight will be available at around noon or so. In spite of these operating conditions, military training activities must be conducted to sustain readiness for defending Finland’s northernmost part as tasked. This is also why the Jaeger Brigade places continuing emphasis on arctic training.

Comprising training for operating in winter conditions as well as SERE and combat training in non-frost terrain, the Jaeger Brigade’s arctic training caters for both conscripts and on duty personnel. The primary training objective on the courses for professional soldiers focuses on sustaining the adequate competence proficiency level of the Jaeger Brigade’s instructors. This training remains also available for the Finnish Defence Forces’ brigade-level units and those of the Finnish Border Guard as well as FDF’s international cooperation partners.

Organised in the freezing January temperatures, the course on winter warfare equals what could be described as the crown jewel of the Jaeger Brigade’s training system. Its present implementation requires and is allocated more personnel, material and resources than any other course given by the Jaeger Brigade. So far, the course has carried the title Winter Warfare Basic Course but we have now come to realise that its Finnish phrasing is somewhat misleading as its English equivalent in that this course is not about instructing the basics per se but rather about offering additional training to already competent on duty personnel. Therefore the title of the course will be rephrased to read as Winter Combat Course. 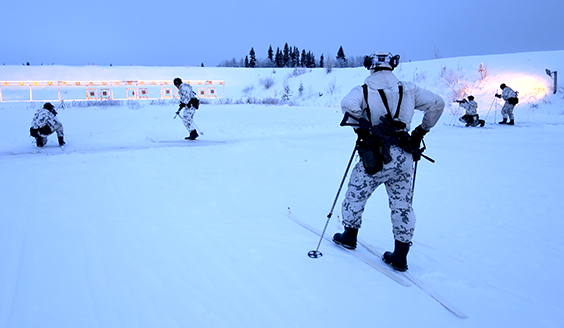 This two-week course conducted in English begins with an arduous seven-day training phase that covers, among others, topics such as using layered clothing, protecting against and treatment of injuries relating to frostbite, sustaining performance capability, making fire by using ad hoc tools, getting versatile skiing practice (incl. cross-country skiing downhill and uphill, skiing skills track, and skiing with and without a rucksack) and plenty of firing practice with and without night vision equipment also on skis, utilising snow vehicles, fortifying in snow, conducting combat in snowy conditions as part of an infantry unit as well as moving on ice and rescuing from the ice. The learning outcomes are then put to test in the test of Vesainen which is followed by a demanding applied phase that continues 24/7 for nearly a week. The two-way engagement features of the applied phase increase its difficulty level with the phase culminating in the course attendants evading a readiness unit tracking and chasing them. Apart from Finnish on duty soldiers, only a few Finnish reservists have undertaken this course. In addition, the course has been completed by students from the U.S., Sweden, Germany, Denmark and, most recently, Estonia.

As regards SERE training, the Jaeger Brigade has supplemented the inherent Finnish SERE skills honed over the centuries by participating in courses organised in Sweden and Norway, which all provide SERE training. The term as such originally dates back to the WWII escape training of the allied forces’ pilots. The SERE training currently organised in the Nordic countries is tailored to fit in our conditions and thereby emphasises the reconnaissance soldiers’ skills in situation-specific operating.

Consisting of four competence proficiency levels, SERE training involves sequenced levels that advance from A, B and C to the instructor level. The entry level A denotes basic level theory-based instruction, whereas level B refers to intermediate level theoretical and practical instruction catering for on duty personnel facing an intermediate threat of becoming cordoned off from the friendly forces. In the Jaeger Brigade’s composition, this training is given to the infantry elements of the readiness unit as well as ranger radio operators. The most demanding level C is reserved for the troops who face a high threat of becoming cordoned off from friendly forces. In the Jaeger Brigade this applies to soldiers undertaking training to become SERE instructors. The SERE instructor training also includes demanding conditions training, which in Finland equals demanding winter SERE training. The Jaeger Brigade provides level B training for on duty personnel in the autumn and for persons liable for military service both in the autumn and in the late winter. 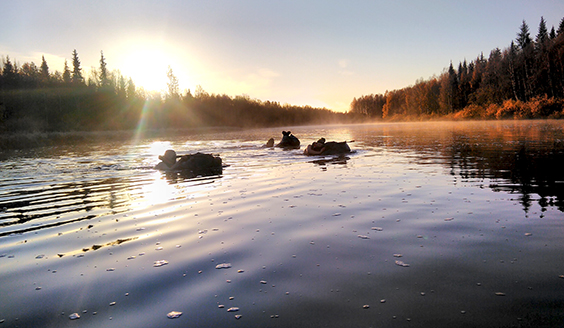 In Finland, the first SERE instructor course for on duty personnel was organised in the early autumn of 2018 attracting participants from the three services and the Finnish Border Guard. The level C part of this course, the phase conducted in non-frost terrain equaled a very demanding period spent in the wilderness of Central Lapland and in urban environment in the built-up area of Rovaniemi. This course is still ongoing as the participants need to pass the winter phase in January 2019 in order to graduate with the qualifications of a SERE instructor.

As a final note

At times there may be comments voiced that characterise arctic training as this something special that a remote unit located up north engages in to be special, or alternatively that is pursued for the sake of upholding the spirit of some sort of wilderness heritage. After all, here up north everyone survives the winter and needs no specific training for doing so. Right. Modern day people tend to fare outdoors less competently than any of the previous generations and therefore the need for bespoke training becomes particularly pronounced. As population centres become concentrated off the southernmost coastline and the news broadcast abound in items on global warming, people may conveniently forget about the conditions that continue to prevail in Lapland. For instance, in Sodankylä on Sunday 26 January 2019, the night temperatures fell down to -38.7 degrees Celsius after having been close to -30 degrees Celsius for nearly a fortnight by then. While writing this, the temperatures are expected to be on the rise again but this still remains to be seen. And, by contrast, the impact of the incessant summer’s light, the difficult terrain of marsh and block fields, sparse road networks as well as the rugged nature of Lapland pose challenges as well.

The topics relating to arctic training organised in the Jaeger Brigade are by no means rocket science updated. Rather, this training combines the experiences accrued over the course of hundreds and thousands of years relating to living up north in arctic conditions with the contemporary knowledge on how the human body functions, what constitutes optimal nutrition and clothing complemented by the best multinational practices identified.

To conclude, arctic training caters for more than mere SERE instruction on the impact of particular conditions and thus aims for fulfilling the set military mission in a given setting. Once correctly trained and equipped, our troops will have as their allies both the arctic conditions and the harsh General Winter. Our training objective is that of a soldier who survives and remains able to fulfil the set mission, and if the threat so requires, makes an intruder’s survival infeasible.