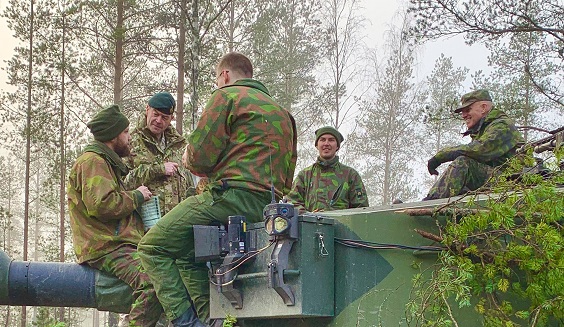 The visit of General Sanders was hosted by Commander of the Finnish Army, Lieutenant General Pasi Välimäki. In Helsinki, the heads of the Finnish Army and of the British Army discussed the two countries’ bilateral interoperable cooperation as well as the UK-led Joint Expeditionary Force (JEF) activity. The commanders also inspected the exercise Hammer 22 in Niinisalo.

– Combined joint exercising has offered very good experience and ideas relating to continuing improvement of our interoperable cooperating. We have clear and uniform ideas for systematic development of our partnership and interoperable capability, Lieutenant General Välimäki says.

– I have served alongside Finnish forces throughout my career and I know that Finland’s accession to NATO will strengthen the Alliance and reinforce NATO’s northern flank. The UK has much to learn from a very different Army with a very dangerous neighbour but remarkable ‘sisu’, General Sanders says.