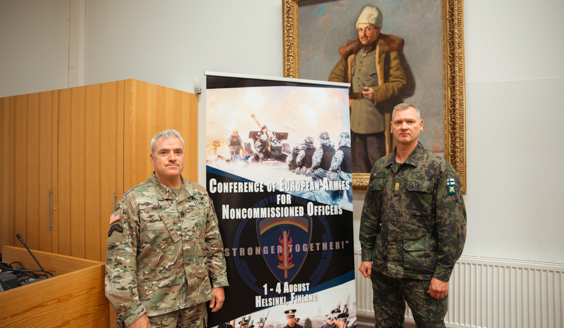 In August 2022, the Army arranged the Conference of European Armies for Non-commissioned Officers (CEANCO). The objective of the conference was to deepen international interaction in means of training cooperation.

With its venue for the first time in Finland, the CEANCO was participated by non-commissioned officers from altogether 22 nations. The conference was hosted by Sergeant Major of the Finnish Army Esa Ek together with U.S. Army Europe and Africa’s Command Sergeant Major Jeremiah E. Inman.

The conference programme involved discussing topical issues concerning non-commissioned officers’ duty description and activity as well as development of non-commissioned officer corps’ cooperation. The key theme for the working groups and training events was the role of the NCO corps in the battlespace as part of large-scale military operations.

- We learned from each other’s procedures, organisations plus culture, and also had time to discuss the development of non-commissioned officer cooperation, Sergeant Major of the Army Ek explains.

Command Sergeant Major Inman also points out that getting to know each other provides important basis for cooperation.

–This offers us an opportunity to get to know each other and share our best practices and procedures among the participating nations. What we learn, we can integrate to our own organisation.

Non-commissioned officers have influence at all levels

Sergeant Major Kenneth Felldén from the Swedish Army and Master Sergeant Arvis Mucenieks from the Latvian Army agree that cooperation enables generating ideas and examining these from fresh viewpoints.

Non-commissioned officers’ tasks rank at all organisational levels – in the U.S. military, among others, the Commander of a given military organisation and the Command Sergeant Major form a Command Team in which the non-commissioned officer functions as part of command and as NCO adviser. According to Command Sergeant Major Inman, the Command Team conducts seamless cooperation that presupposes confidence and trust as well as involves team work entailing active exchange of information and operating like a fireteam:

–If my Commander looks left, he wants me to look right. This is because if we were at the same location all the time, we would see the same things.

As of 2018, the Finnish Army composition includes the position of Sergeant Major of the Army, whereas the other services have featured the position since the spring of 2022. The versatile tasks include, for instance, participating in planning and developing NCO education and training, sustaining NCO corps’ heritage and legacy, as well as representing the service in international meetings. Furthermore, the Senior Enlisted Leader also maintains contacts with international cooperation partners.

Multinational exercising and cooperating contribute to developing the competences of organisations and individuals as well as increasing confidence among partner nations. The impact of conducting exercise drills and cooperation becomes discernible, for instance, while in field training exercises involving force integration training.

Sergeant Major Ek points out that a vital part in cooperation equals having the opportunity to study in programmes and on courses offered by partner nations.

–We also have the opportunity to develop our competences on courses organised by partner nations. In matters relating to education and training, our key partners include the U.S. Army NATO School and the Swedish Army.

Master Sergeant Mucenieks emphasises the importance of cooperation conducted together with partner nations.

–The key point is that we are not strangers to each other.