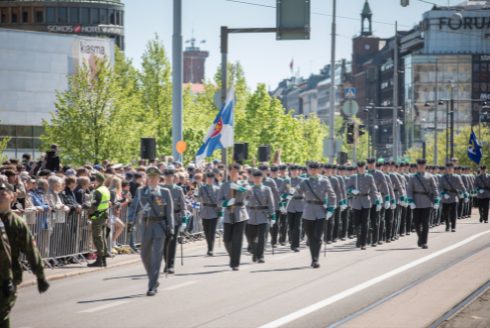 The national parade on the Flag Day of the Finnish Defence Forces to be held on 4 June 2022 will contribute to changes concerning traffic, parking and public transport in Helsinki. To avoid traffic congestion, the public is kindly asked to move on foot or by public transport in the city centre during the parade events.

The parade arrangements will start on 3 June in Helsinki city centre. The main part of the parade troops, vehicles and equipment will arrive in Helsinki at the Senate Square and Kansalaistori Square during the afternoon and evening of 3 June, to then depart from Helsinki in the wake of the event on Saturday 4 June.

The most significant changes concerning traffic control and parking arrangements will be discernible at the Senate Square and in its vicinity: on Mariankatu, Kirkkokatu and Mannerheimintie, as well as on Mäntymäki field and at Kansalaistori Square.

At event locations, for sustained public and march detachment safety and due to event arrangements, streets will be closed off from vehicle traffic, and parking restrictions will apply in Kruununhaka area. The restrictions will be terminated in the wake of the event as promptly as possible.

Parking and traffic restrictions in Helsinki on 3.-4.6.

Parking restrictions and traffic arrangement control measures will be applied in Kruununhaka area from 3 June at 6:00 to 4 June at 15:00. The restrictions will especially affect Mariankatu, Unioninkatu, Snellmaninkatu and Kirkkokatu. The affected area will be marked by signs indicating the given restrictions.

Parking will also be restricted from 3 June at 6:00 to 4 June at 21:00 in the parking area of Mäntymäki field.

Kirkkokatu, Unioninkatu, Snellmaninkatu and Aleksanterinkatu will be closed off from vehicle traffic on 4 June at 10:30-15.

The vehicles participating in the Finnish Defence Forces’ review of troops and pass in review will be on the move to the Senate Square during the afternoon and evening of 3 June along the route Mannerheimintie–Eteläesplanadi–Pohjoisesplanadi–(Unioninkatu)–Pohjoisranta–Aleksanterinkatu–Senate Square.

The Helsinki Police and Military Police will restrict and control traffic at the Senate Square on 4 June from 10:30 onwards. The public will be welcome to follow the review of troops from the direction of Pohjois-Esplanadi and Aleksanterinkatu. Pedestrians are kindly asked to use footpaths.

Following the review of troops, the dismounted marching detachments will advance from the Senate Square on Unioninkatu to Aleksanterinkatu to Mannerheimintie to the start line of the pass in review at the intersection of Simonkatu and Kaivokatu. Prior to the pass in review, the vehicles part of the review of troops will follow the dismounted marching detachments to Aleksanterinkatu.

The pass in review will affect the availability of pedestrian crossings on Mannerheimintie between Aleksanterinkatu – Töölönlahdenkatu. For sustained pedestrian safety, crossing closed-off streets and movement along them will remain forbidden. Possible bypasses will be the routes under Mannerheimintie e.g. between the railway station and Forum mall.

The Military Police and Helsinki Police will guide and control traffic at key intersections in the area.

The pass in review will finish on Mäntymäki field from which the motorised parade detachments will start the return march back to their home garrisons.

In the afternoon following the pass in review, Mäntymäentie will be closed off from traffic during equipment transporter loading.

The equipment display that is to be held at Kansalaistori Square will be disassembled on 4 June from 19 onwards. After this, the remaining parade troops will return to their home garrisons as well.

The event has free admission, and we welcome the public to follow the day’s events. Please follow the instructions and recommendations of the regional health authority concerning coronavirus prevention measures in public events as well as health secure practice appropriate to the situation at the time. The parade area is a no-fly zone, and drone activity remains strictly forbidden for sustained event safety.

For more information on the programme for the day, please see: puolustusvoimat.fi/en/flag-day.