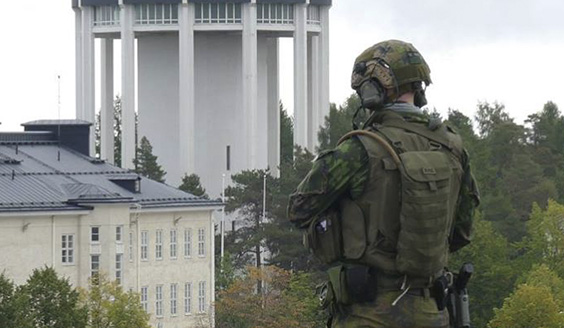 The Finnish Army will conduct training in local defence tasks and missions by means of local defence exercises organised in South Ostrobothnia, Kainuu, Tavastia Proper, Central Finland, Kymenlaakso, Lapland, Pirkanmaa, and Uusimaa from 9 to 13 September 2019. These exercises serve to develop local defence readiness and capability as well as inter-authority interoperability in rapidly evolving situations over the entire territory of Finland. Altogether, approximately 4,100 persons from the Finnish Defence Forces and other authorities will undertake training.

The local defence exercises will involve service personnel, military police companies and readiness unit conscripts as well as local units with reservists who know their own region well.

The local defence exercises will be visible in built-up areas and have the Finnish Defence Forces and participating authorities conduct training in local defence tasks.

– Consisting of reservists and service personnel, the local battalions play a key role in safeguarding society’s vital functions. The strengths of the local units include solid knowledge of the set area of operation complemented by task-specific bespoke equipment and training, Colonel Hirvonen describes.

– Examples of the tasks to be trained include protection of key targets, territorial surveillance, capacity for counter-special operations forces and provision of support to other authorities. In fact, the local defence exercises provide us an excellent opportunity to train these tasks in cooperation with other authorities. While undertaking training, we identify lessons learned and accumulate feedback that will inform further development of local defence measures, Colonel Hirvonen continues.

The exercises are in accordance with the Finnish Defence Forces’ Action Plan. The exercise activities of the Finnish Army are based on tasks relating to emergency conditions as well as on developing troops’ capability and competence proficiency.

In conjunction with the exercise, blank ammunition will be used that pose no threat to bystanders but will cause noise. The exercises include a high number of military vehicles, such as main battle tanks and armoured personnel carriers. In addition, exercise-related flight activities will be part of some of these exercises.

It is possible to follow the exercises on the Finnish Army social media using hashtag #paikallispuolustus: