EOD training is one of six training branches at the Karelia Brigade. In the defence reform of 2015, EOD training was centralised in Vekaranjärvi. An EOD Company, which is a relatively compact and functional unit, was established within the Kymi Engineer Battalion. Also the training sites were modernised when the training was started.

Among other things an engineer training facility was built within the garrison. Motivated instructors, who are experts in their field, find it easy to get the conscripts involved in the interesting training.

The Karelia Brigade's centre of know-how in explosive ordnance disposal (EOD) provides conscripts with training in responding to different threat scenarios. After training, conscripts are capable of working within Defence Forces' troops and also in cooperation with e.g. the Police and Rescue Services.

The EOD Company's EOD platoons come to the aid of supported troops and partners in cooperation in solving problems caused by explosives. Clearing explosives is perhaps thought to relate only to wartime activities, but it is in fact needed also at other times. An example of this is executive assistance given to the Police in clearing wartime explosives, which is carried out by salaried personnel trained for this task. Activities take place on a weekly basis. Another example that can be mentioned would be a post-war situation, where different mines, mine barrages and explosives are cleared. There are still a lot of explosives to be cleared in the world.

In training EOD tasks, conscripts' capacity for creative problem-solving is put to the test on a daily basis. Problems relating to explosives to be cleared must be solved using all the skills learned in training. For this reason, conscripts learn to understand the importance of the overall picture already early on in EOD training. Only by understanding the whole and considering different alternatives, can they be successful in solving a problem.

The Karelia Brigade practised clearing unexploded ammunition at control points in April. Lieutenant Salonen, from the Kymi Engineer Battalion was an instructor at this control point. - At this control point the task was to clear an unexploded munition, Salonen explains. - The tasks also included planning and setting up protection, adds Salonen. - Here we were to remove a hand grenade from the sand, says Sapper Niko Partanen (Sulkava) from the EOD Company. - The most important things are protecting people and buildings and doing it with afterthought, Partanen adds. - We did quite well, even though this was the most challenging control point, Sapper Partanen says. - The other control points took much less time, this one took more than two hours, says Sapper Niila Nevaranta (Tuusula). - It is quite a challenging job and you have to be systematic about it, Nevaranta adds. 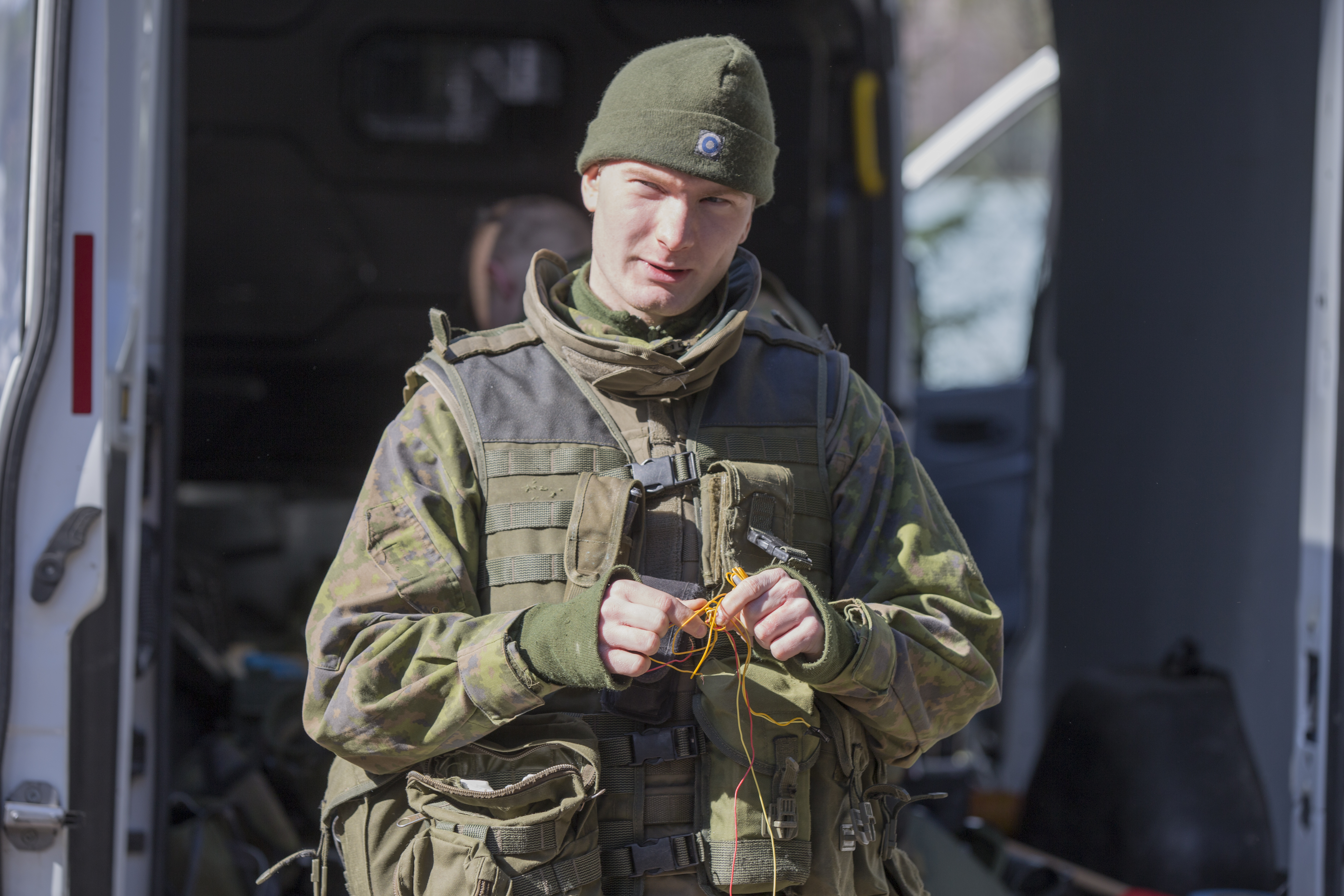 - The control points measure the team leaders' capability to lead their own team, act in a safe manner at the site and plan how to protect for example buildings at the site. - Risk analysis is also a part of the team's tasks. This includes for example what type of explosive is in question or what indirect threats there are, such as air, ground or other enemies, says control point instructor, Lieutenant Salonen.

Conscripts in EOD training find the challenging tasks very interesting and the creative problem-solving very gratifying, nor should one underrate the significance of the suspense that working with unexploded ammunition brings.

The role of the conscript NCO leading the EOD team is emphasised in carrying out EOD tasks. Although his/her superior in exercises is a future reserve officer, the responsibility for the successful completion of the task mostly lies with the EOD team leader. The EOD team leader is the person who seeks the solution to the explosive situation together with the leader of the unit responsible for the area. Here, team leaders may find themselves in situations where their professional skill and success is assessed by a field chief of the Police or e.g. a commanding officer of a logistics company.

The main equipment used by conscripts in EOD training is the Finnish EOD specialist's protective suit 2000, which with its 20 kilos quickly teaches the young men and women the importance of good physical fitness. 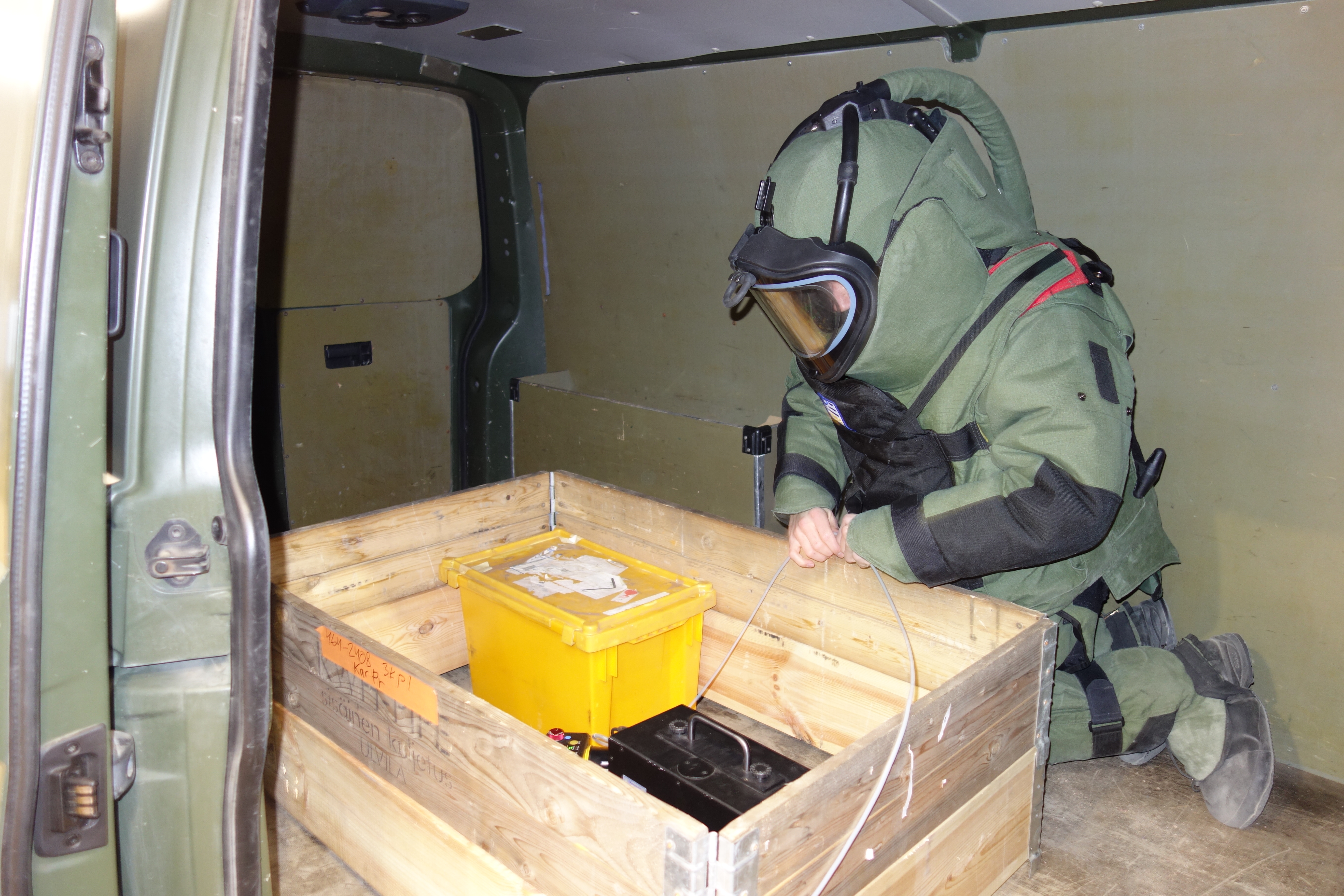 While using the teaching materials in the English language, conscripts become familiar with international abbreviations and acronyms of the field, such as EOD (Explosive Ordnance Disposal) and IEDD (Improvised Explosive Device Disposal). In training, language skills learned earlier in life are augmented as understanding of the operating principles of ammunition and the meaning of technical terminology must be achieved using material in English. 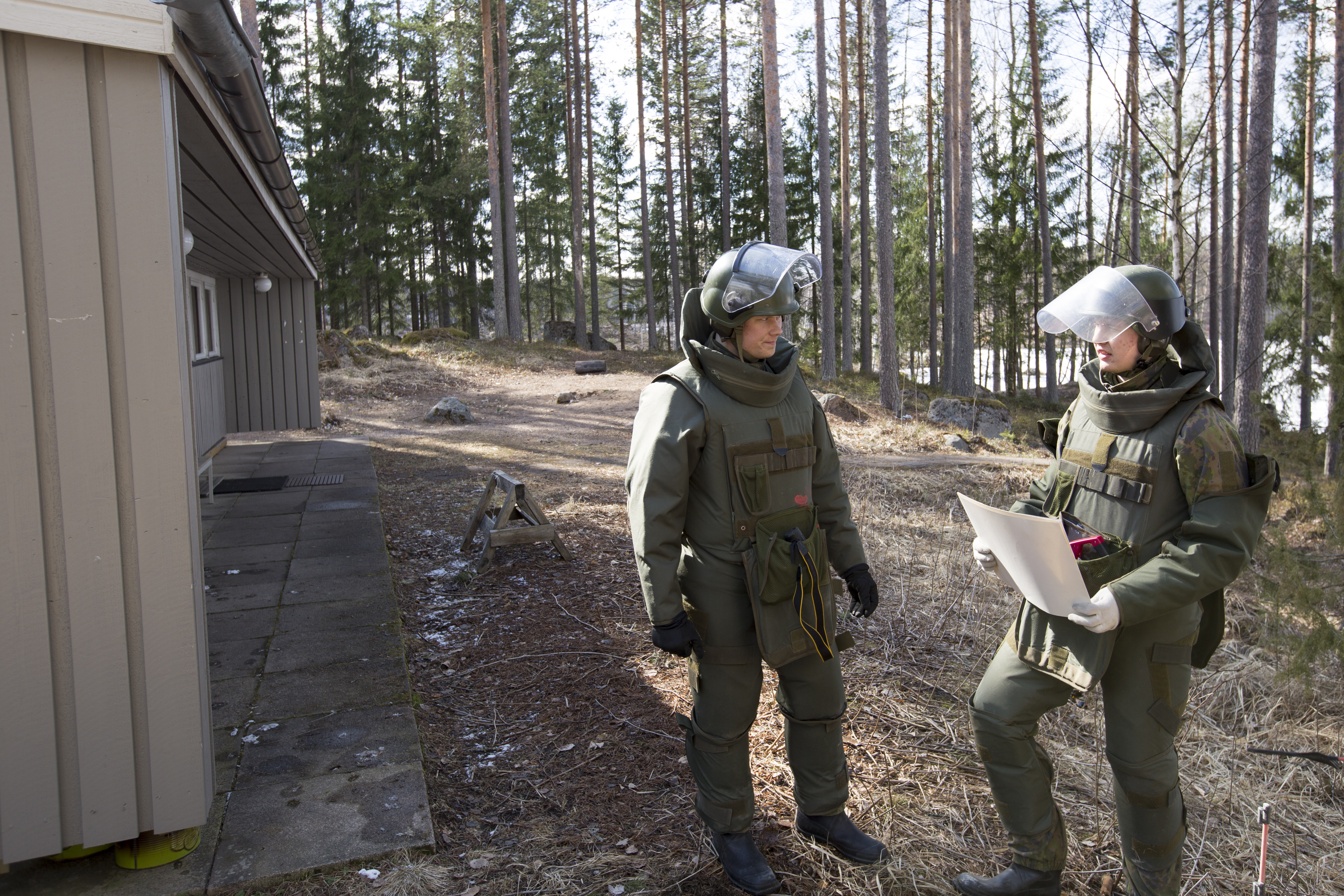