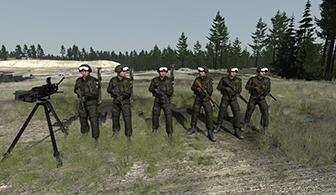 The commissioning of both systems is part of the Finnish Army’s wider efforts to expand simulator activities with the aim of enhancing military training and improving the quality of combat training in a brigade-level units.

The purpose of the units’ own KASI and VKY systems is to integrate simulator-assisted military training into the daily training of basic units to support other training methods and provide alternative implementations for tactical and combat technical training. 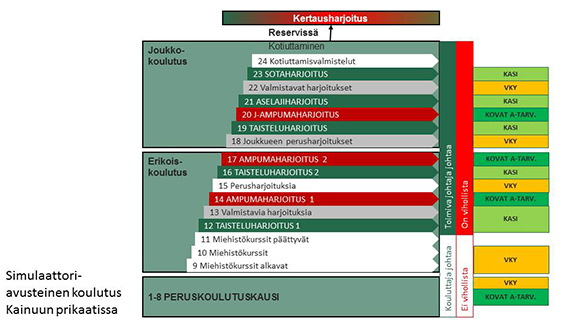 Over the course of 2016 and 2017, Army units have implemented the new KASI Manpack 300 simulator system to support combat training in field environments. In practice, the system is a streamlined and modernised version of the KASI system previously used by the Pori Brigade’s KASI unit.

The KASI Manpack 300 system is intended for the two-sided combat simulation of units roughly the size of a company. No fixed or heavy positioning equipment is necessary: in its most stripped-down configuration, it only requires a system briefcase carried by one operator, which collects data on events during the training exercise at a radius of approximately 1.5–3 km of the unit.

Most commonly, the system is used from a simulator room built into a personnel transport van, which enables mobility across areas as necessary. The training troops are no longer required to be assembled to a centralised debriefing away from their operating area, as the system can be driven directly to them once the combat engagement is over. This enables quick feedback, so the exercises can be repeated as necessary based on what was learned. 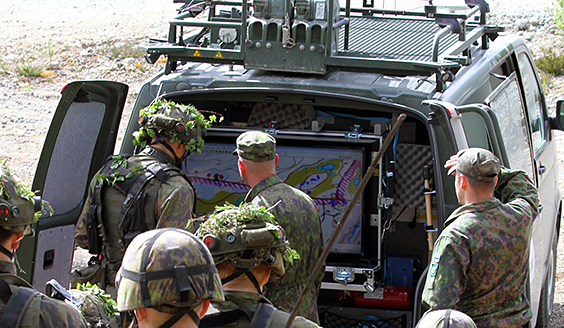 The system’s operation is based on combatant vests equipped with GPS positioning capabilities, as well as vehicle-mounted simulator kits and the KASI Manpack 300 system. The movements and activities of combatants and vehicles can be monitored in real-time via the central processing unit’s map view. In addition to the vests and vehicle kits, the system includes weapon-mounted and field-installed simulator equipment, which can be used to represent the majority of infantry weapons systems.

The most visible component of the KASI system is the simulator vest worn by the combatants. It consists of harnesses which are equipped with prisms and attached to the helmet and combat vest. The purpose of the simulator vest is to receive the laser impulses transmitted by the various weapons systems, based on which the vest then indicates to each combatant and the central processing unit the extent and type of the damage caused by the weapons systems. In addition to the prisms, the vests are equipped with a GPS positioning device, speaker and attitude sensor. 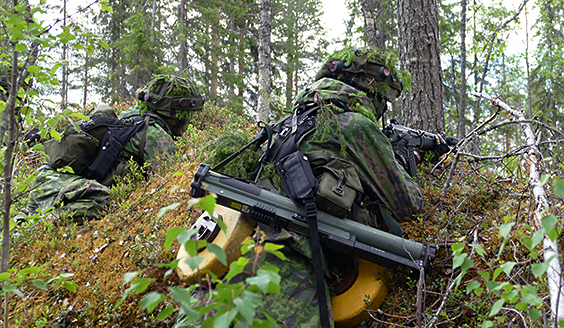 Alongside the vests, the system includes a wide range of infantry weapons from assault rifles to anti-tank weapons and explosives, all featuring laser transmitters. All data generated during combat is stored on the vest’s central processing unit. The data of the central processing unit is then utilised to provide feedback to the troops being trained.

The KASI system has been used to replace its predecessor, the TASI combat simulator, which has been utilised by many units. Providing each Army unit with its own KASI system enables training exercises to be arranged at a higher frequency and lower scale, since there is no dependence on other units’ schedules with regard to the simulators, as was the case with the older KASI system.

The intention is for basic units to use the equipment to support daily training, instead of large-scale combat exercises alone. As the components of the KASI system are mutually compatible, the unit-specific KASI simulators can also be used in more expansive nationwide exercises. 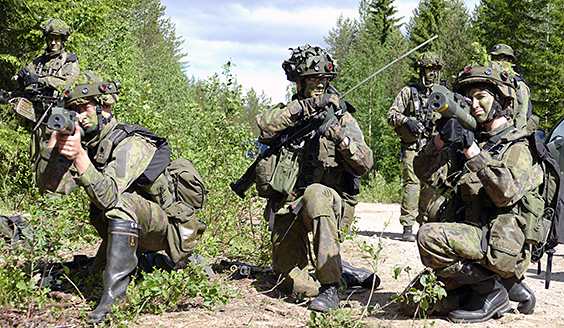 The Virtual Training Environment (VKY) has been adopted by brigade-level Army units on a corresponding schedule as the KASI Manpack 300 system. The previous VKY versions (e.g. VBS 2) have been used for years by the Armoured Brigade and the Reserve Officer Course.

The virtual training environment and its tools support training in a variety of military branches and combat activities. It can be used as a substitute for some classroom topics, and it is suited for educational practice before actual field exercises. In addition to this, applicable parts of it can also be used to test battle plans before carrying out a mission. 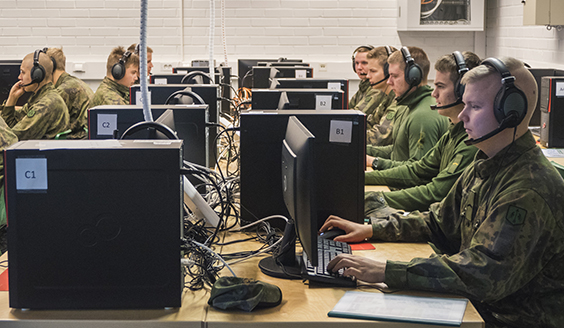 The software used for the virtual training environment is Virtual Battlespace 3 (VBS3), which is a professional version of the ARMA 3 computer game developed by Bohemia Interactive Simulations.

VBS3 is a "first person shooter" computer game/simulator program, in which the users experience the virtual world with their own eyes and ears in a vast and diverse environment. The virtual world is based on reality, which has been modelled to be as true-to-life as possible, including physical limitations. The system is used in classrooms on commercial computers, which each trainee operates to guide a combatant reflecting his or her mission role on the computer screen.

VBS3 is commonly used for tactical and combat technical training by brigade-level units of the Finnish Defence Forces and Finnish Border Guard. The software is suitable for practising infantry combat, fire command and urban warfare, and can serve as a tool for training command activities during battle.

The simulator models the infantry, the most typical military vehicles and weapons, and aircraft. The system also enables the modelling of actual training terrain and operations in these areas.

The VKY simulator makes it possible to practice any military activities that develop combat technical or tactical understanding. Experiencing all battlefield actors and phenomena in a concrete manner is far more efficient in developing this understanding than any elements affecting the units’ operations within the imaginary framework of day-to-day combat training. 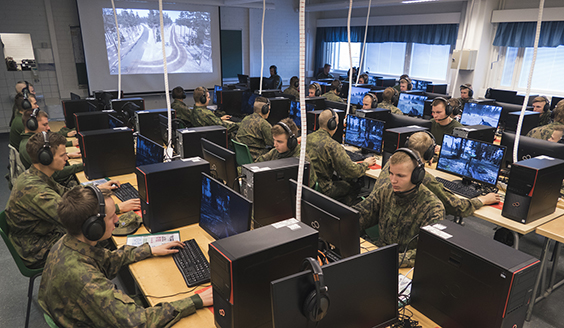 In the virtual training environment, the transition from demonstration to action can be instantaneous without any limitations imposed by the physical world. This means that individual actions and performances can be repeated multiple times during a training session without expending any actual resource (vehicles, fuel, equipment, roads, environment, etc.).

Moreover, activities in a virtual environment are not restricted by any peacetime safety regulations, service safety norms or cost caps, which means that even wartime combat operations that are, for one reason or another, impossible to train for during conscript service or reservist refresher training can be practised, covering all relevant special features and attributes.

The virtual world also provides the opportunity for unique and independent applications, experimenting with otherwise hazardous aspects and making mistakes in a safe environment.

Even though VKY is a modern teaching tool, it still has its limitations. For example, it cannot replace basic training in weapon handling and firing. The system cannot be used to simulate firing stances, eye-hand coordination or the impact of weapon recoil on accuracy. This means that VKY is not a replacement for basic and combat firing exercises or field combat training.

In other words, the virtual training environment should not be used for any training that could be done more efficiently in practice in an actual operating environment.

Each brigade-level unit of the Army trains 2–4 conscripts for the virtual training environment’s support and maintenance tasks. These VKY conscripts serve as both 3D modellers and programmers. The 3D modellers create content for VBS 3, whereas the programmers implement their work in the actual simulator.

In the Kainuu Brigade, the VKY conscripts also participate in operating the KASI Manpack 300 system and maintaining the KASI simulators during large combat exercises. 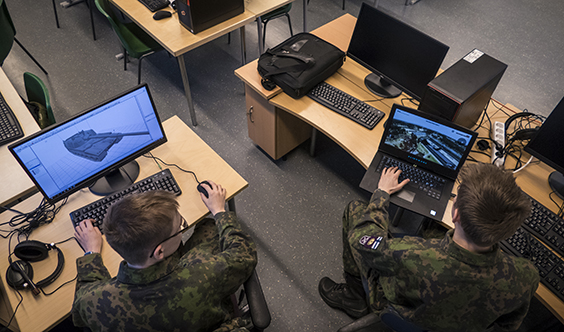 The simulator-assisted military training of the Finnish Army’s brigade-level units consists of practical training with the right equipment, the KASI system and VKY.

Depending on the unit, there is some variation in the focus areas and extent of simulator use. However, the most important thing is to realise that simulator-assisted and practical training form a comprehensive whole, wherein the goal is to reach the desired result in the most efficient way possible.

During the special training period, the conscripts learn to conduct their own wartime duties as part of their squad, for which the virtual training environment is an excellent tool. 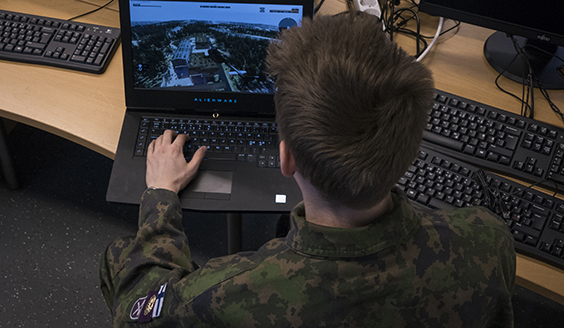 VKY provides the opportunity to learn about all capabilities and combat methods of one’s own unit without limitations. In addition to this, the system helps individual combatants to understand their own role and the significance of their squad through performing the relevant duties in a life-like operating environment.

Towards the end of the special training period, the conscripts proceed to practising and applying the basics of combatant and squad operations learned through VKY in unit-level field exercises by means of the KASI system. The system is used to test whether or not the unit can complete its assigned tasks on a practical level. KASI also enables data collection and feedback, based on which the unit’s competence deficits can be remedied before the beginning of the unit training period.

During the unit training period, the conscripts transition to operating as part of their platoon and company. Actual battlefield activities and dimensions affecting the unit’s operations are introduced at the same time. In the same way as during the special training period, the basics of operating as part of a larger force are learned through VKY, after which the lessons learned are practised in a field environment by using the KASI system.

During unit training period, VKY can also be used for practising tasks related to larger combat exercises before practical implementation with KASI.

Alongside practising combat techniques and testing battle plans, VKY is used after the basic training period to practice demanding combat firing. As the conscripts gain familiarity with firing situations and safety technical errors and deficits can be remedied during virtual training, the implementation of firing practice becomes much faster and safer for the personnel involved.

Although simulator-assisted military training brings efficiency and cost savings to conscript training, it cannot fully replace traditional military training, which includes a variety of areas such as physical education as well as training on weapons and firing. Simulator-assisted training provides a more meaningful and realistic environment for learning the basics, but it does not remove the necessity to practice the lessons learned and test unit capability in the field using actual equipment in conditions that are as realistic as possible.

Even though simulators will surely play an important role in the future training of capable wartime troops, we must understand that they are merely one training resource among many – not an all-encompassing solution to meet the needs of all military training. 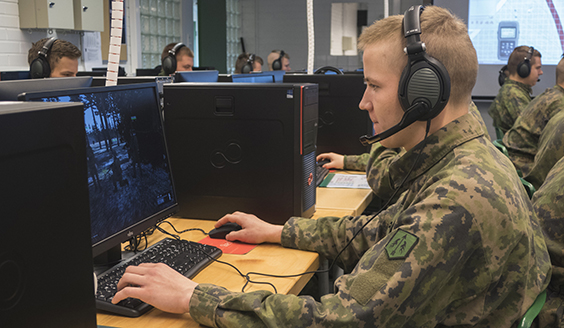