The exercise Northern Forest 21 was set in operation 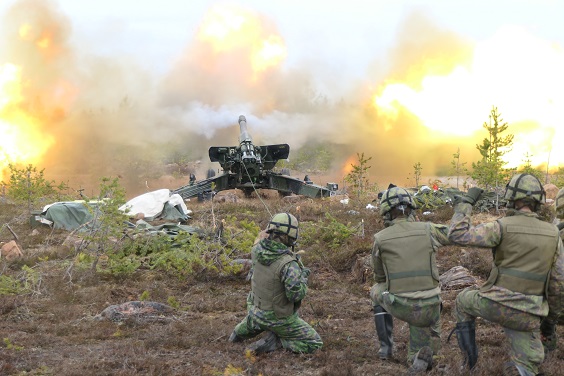 The exercise Northern Forest 21 of the Army was set in operation on Wednesday 19 May 2021 as the artillery firing began.

One of the first firing units was the 2. firing battery of the Kainuu Brigade that initiated artillery fires at the Rovajävi Range and Training Area. This was the first firing conducted by the NCO students of the NCO firing battery programme by using the cannon 152K89. Previously, they had operated the smaller field howitzer 122H63.
The gun platoon supervisor of the 2. firing battery of the Kainuu Brigade, Staff Sergeant Ryhänen explained that the day’s training objectives included developing troops’ combat readiness, instructing how to operate the new equipment plus firing by using the heavy equipment. The most important task of the artillery is to provide operational and tactical support to the other units. Neutralising and annihilating key enemy targets, fires provide support to own infantry operating.

The artillery offers conscripts a wide variety of service duties. For instance, the gun platoon comprises a number of positions for section leaders and for the rank and file. The members of the gun crew are responsible for laying the gun to the direction of fire and practical firing activity, in accordance with the fire missions issued by forward observation. The artillery section comprises set roles that remain the same throughout the exercise: the gun section leader, gun layer, loader, gunner, charger, and projectile operators. A sense of common purpose is important as operating the guns requires a unit, and everything is coordinated.

The duties of the leadership phase begin in July as the new recruits start their military service.
Student Private First Class Ekholm and NCO student Salmela, both from Iisalmi, familarised with the guns already earlier while attending a training exercise at the Vuosanka Range Area. Both view the exercise as the high point of their military service so far, but this NF21 may turn out to become an even more memorable experience. Eagerly awaiting what the coming two weeks entail, Salmela undertakes training to become a measurement NCO, whereas Ekholm will be an ordnance NCO.

On Wednesday, student Private First Class Marketta Ikäheimo, 23, from Pielavesi, who started her voluntary military service for women in January, fired the gun of the cannon 152K89 for the first time. NCO student Ikäheimo serves in the 2. firing battery of the Kainuu Brigade and undertakes the NCO2 Course at the moment to be mustered out into the reserve in December 2021.
Student PFC Ikäheimo has earlier fired a 122-mm gun but “this 152-one has more recoil and looks great”, she remarks.
PFC Ikäheimo applied for voluntary military service for women as she wanted to get an experience that the civilian life fails to provide and to carry out duties that are possible only in this environment. “And, after all, this national defence is everybody’s business. I want to do my share.”
The Kainuu Brigade has a strong presence in the exercise NF21 as it is one of the biggest units in the exercise audience.

Organised and led by the Army Academy from 17 May to 3 June, the exercise NF21 is participated by altogether circa 7,000 soldiers from a number of brigade-level units. On social media you may follow the largest exercise of the Army this year with

The majority of this article as well as its photos were produced by the public communication conscripts serving in the Army Command.