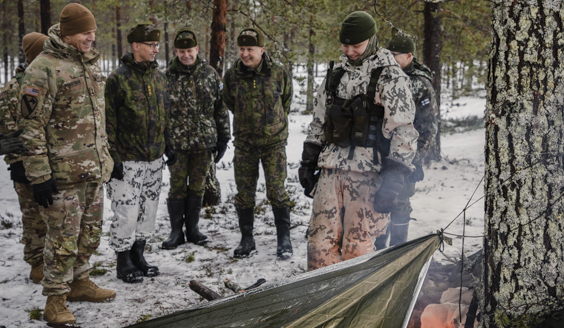 Deputy Commander of U.S. Army Europe and Africa, Major General Peter B. Andrysiak viewed activities of the Army and of the Finnish Border Guard in Northern Finland from 15 to 19 November 2021.

– Very impressive. The readiness unit is a group of very professional Soldiers and observing your training has been a great honor.  I look forward to our continued cooperation in future exercises, Major General Andrysiak gave feedback to the readiness unit in a debriefing event following the LIVEX.

Major General Andrysiak was also familiarised with Army arctic training. His visit was hosted by Commander of the Army, Lieutenant General Petri Hulkko. During the visit, the commanders discussed bilateral cooperation between the Finnish Army and the U.S. Army.

For instance, there has been cooperation in the context of exercise activity. For a number of years now, U.S. Army troops stationed in Europe have participated in the Army mechanised exercise Arrow in Niinisalo, and, in 2022, altogether 250 U.S. Soldiers are expected to undertake training at Pohjankangas.