Force 2035 equals a formation that is utilisable on a national scale and is capable for operating independently. The formation is equipped with the top capabilities and is capable of conductiong joint operations with the Air Force and the Navy as well as the Border Guard.

The main effort in developing the Army of the 2030s is in increasing in particular firepower and mobility. The conditions affecting the development of the forces include the challenges in anticipating the characteristics of the new technologies to be adopted in use, the price development of defence materiel as well as ever increasing personnel costs. The Army’s forces must sustain the ability of operating in varying circumstances ranging from hybrid threats to demanding combat missions. This requires high readiness of the army key- capabilities and personnell.

Force 2035 is an Army spear-head capability which belongs to the operational forces of the Army. 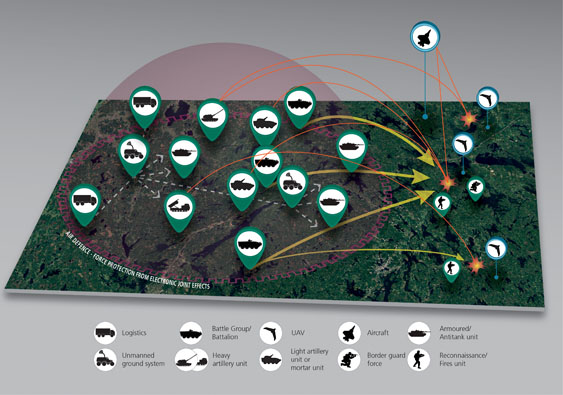 The Force 2035 has the capability to operate independently in the entire area of the country. The Force sustains an optimal capability to operate as part of a joint operation and exploit the capabilities of the Air Force and the Navy as well as the joint capabilities of the Defence Forces. The formation must be able to survive on their mission in all Finnish terrain types and in all conditions. Maintaining a balance between tactical and operational maneuverability remains a challenge. For instance, wheeled armoured vehicles with good operational maneuverability fail to correspond fully to the requirements set by future tactical maneuverability.

The advancement of technologies allows increased precision in observing and locating the enemy. In the worst case scenario, the troops operating in forest-clad terrain may be as unprotected and vulnerable as the Iraqi armoured vehicles in the desert during the Gulf War. Parallel to developing camouflage systems, the force must also enable the adoption of completely novel procedures.

It is C3 based on accurate and superior common operational picture that enables the concentration of joint firepower and dispersion of force protection. This means that C3 and its implementation in particular have to be executed more rapidly than an adversary’s actions. The common operational picture must be available also for the forces operating dispersedly. Despite the advancement of technologies, operating continues to draw from mission command.

The Force 2035 must have in its immediate utilization access to the key capabilities of all the service branches. Yet, the supporting of the striking capability needs to be realizable by employing new procedures. This asks for concentrating the resources for supporting the combat by a striking echelon while simultaneously delivering joint effects in the front of the formation in order to support the elements of reconnaissance and fires and to surveil the rear and the flanks.

The Force 2035 must be capable of joint operating with other forces of the Army, the Finnish Border Guard as well as the key units of the Navy and the Air Force as part of a joint operation. The formation also needs to be able to exploit the support provided by the joint capabilities of the Defence Forces and, in case the setting requires, assume command of other forces of the Army. The Force 2035 will be entrusted with the interoperable capability in operating jointly with international partners.

The conditions set for the development of the formation are influenced by the allocated resources, the remaining force structure subject to development, and the maturity of the tehchnologies available as well as their operational utilisability.

It is the entity that defines the overall necessity of the formations, but, as regards readiness and the requirement for defending the entire country, the Army must be prepared to operate in the area of the entire country and to do so simultaneously in multiple directions.