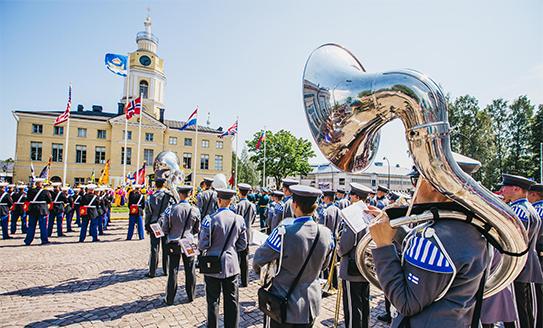 Hamina Tattoo International Military Music Festival will be held on 11–16 July 2022. The Tattoo Week of events will include a selection of military bands’ concerts available free of charge in Kesäpuisto Park, a Tattoo Parade at Town Hall Square, as well as a variety of stalls and music performances along the Tattoo Street. The week will culminate in the March Show performances of military bands at the Hamina Bastion event arena.

In conjunction with the event, from Wednesday to Saturday on 13–16 July at 12–19, visitors may familiarise with the Finnish Defence Forces’ activity and equipment at an event field situated right in front of the Reserve Officer School Main Building along Kadettikoulunkatu. This venue will offer familiarisation with conscript training and activity of the Army, Navy, and Air Force, as well as with Army equipment. Additionally, from 11 to 16 July, the Finnish Navy fast attack craft Hamina will be at its berth at Tervasaari pier.

A fortress town abounding in history, Hamina provides an excellent environment for arranging a military music festival in that the Reserve officer School operating downtown Hamina makes the town significant to the Defence Forces and to a high number of reserve officers who completed their conscript training part of the liability for military service here.

– Since its beginning, this event has always been held in Hamina. And I am proud of the fact that this internationally known Tattoo can still be arranged in exactly this military town that I value and appreciate, Finnish Defence Forces’ ACOS Personnel, Major General Rami Saari says.

Alongside the performances featured in Hamina, the Hamina Tattoo display of military music can also be enjoyed in Helsinki as part of the Mini Tattoo event held at Senate Square on 11 July from 12:00 onwards. At the Senate Square, the performances will be by the Finnish Navy Band, the Conscript Band of the Finnish Defence Forces, the Mountain Band of the Bundeswehr, the Royal Regiment of Scotland Pipes and Drums, and the Willem Friso Royal Military Band from the Netherlands.

Over the years, the popularity of the Hamina Tattoo event week and its internationalisation have contributed to overall strengthening of the position of military music in Finland. The international military bands participating in this year’s event week will include the Royal Regiment of Scotland Pipes and Drums, the Band of the Royal Netherlands Army, the Mountain Band of the Bundeswehr, as well as Trinidad and Tobago Defence Force Steel Orchestra.

– Hamina Tattoo well embodies the notion of "military music as the Finnish Defence Forces’ music playing business card”. As such, Hamina Tattoo and its visibility serve, among others, in recruitment and in strengthening the will to defend. Nowadays, international cooperation is part of our daily activity. For the military music branch, this cooperation provides access to, for instance, good practices validated elsewhere as well as new perspectives to consider while developing own activity, Major General Saari points out.

The Finnish Defence Forces welcomes everyone to Hamina Tattoo!