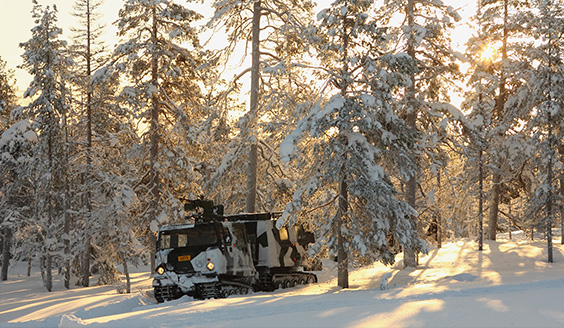 The European Commission has granted funding for the development of innovative future vehicle solutions by the Armies of nine European Union nations. In Finland, the funding is used for developing arctic mobility by a project that seeks a replacement vehicle solution for the ageing and soon decommissioned all-terrain carrier fleet.

The Army develops and secures the mobility of its troops in the region of Northern Finland by the Arctic Mobility Programme. The multinational European defence industry cooperation project led by Finland is closely connected to the development programme.

In Finland, the funding is used for developing arctic mobility by a project that seeks a replacement vehicle solution for the ageing and soon decommissioned all-terrain carrier fleet. Partly outdated, the army’s all-terrain carrier fleet will be at the end of its service life cycle in the 2030s at the latest. The new replacement vehicle solution aims to generate the basis for northern mobility capability. The development work rests on long-term and thorough research as well as on the defence budget and its development programme.

- The arctic region and northern defence have been growing in importance. Preparedness for defending the whole country presupposes that the Army sustains the capability to ward off threats, protect and defend also the northern regions when necessary, Inspector of Infantry, Colonel Rainer Peltoniemi points out.
- For the demanding circumstances in the North we need excellent tactical terrain mobility combined with the capability to operate promptly in all of Northern Finland. The new vehicle system is required to feature excellent tactical and operational mobility. The project is aimed at replacing the current all-terrain vehicles and producing and building a new vehicle fleet for the most capable troops of the northern region.
This marks an important opening for Finland and, by the same token, a significant sign of acknowledgement from the EU as well. We now receive also EU funding for the project implementation as well as combined expertise by the nine EU countries. This is the first EDIDP project in which Finland serves as the lead nation.
This is a fine collective success by the Defence Forces and by the Patria-led industry consortium, Colonel Rainer Peltoniemi sums up.

The Army will release information on the project advancement for its part.