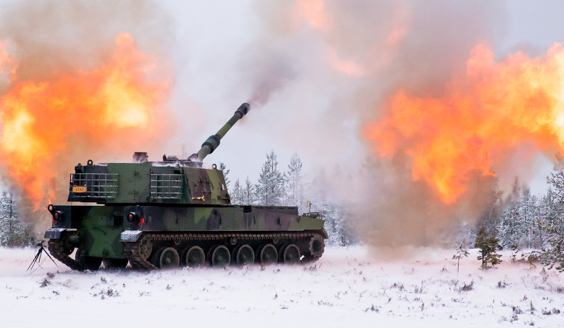 In February 2018 it will be 100 years since the foundation of the Field Artillery of Independent Finland and the Artillery School. The Finnish Defence Forces honour their 100th anniversary with an artillery equipment display in Helsinki on 9 February.

The Army has an artillery equipment display on the Senate Square on 9 February. The audience has an opportunity to see for example howitzers, cannons and artillery rocket launchers. The newest addition is the 155 mm armoured howitzer K9 Thunder.

Additionally, you can see a demonstration of a horse-drawn artillery gun position occupation. The demonstrations will be conducted by the riding club Niinisalon Ratsastajat and the Kankaanpää Region Artillery Association (Kankaanpään Seudun Tykistökilta ry).

The field artillery is a central part of the Army’s capability. The artillery is developed with long-term goals in mind and by taking advantage of the possibilities offered by new technology and developments in the field of artillery. The field artillery is a versatile and technological branch that is well-suited for a military built on general conscription and offers many different training opportunities.

–Our artillery has been developed based on the foundations laid by General Nenonen, from the perspective of national defence and of a conscription-based military. Finland has Western Europe’s most capable artillery. In the artillery we trust in the skills and knowledge of our conscripts and reservists, even in the most demanding situations. These skills are constantly on display in our national exercises. Our training system works and we can be proud of the skill level of our conscripts and reserve and of the capability of our artillery, says Colonel Pasi Pasivirta, who is the Inspector of Artillery in the Army Command.

Wreaths will be laid on the graves of General of the Artillery, V.P Nenonen, of Marshal Mannerheim and by the  Cross of Heroes.

By the equipment display at 10.30 and 13.00 there will be a demonstration of a horse-drawn artillery gun position occupation.

The events are free of charge.

Traffic arrangements of the event

Because of the event, traffic around and at the Senate Square is restricted starting from 8 February at 16.00. Hallituskatu will be closed to all traffic between Snellmanninkatu and Unioninkatu for the duration of the even and its dismounting.

You can follow the events via the Finnish Defence Forces social media channels: