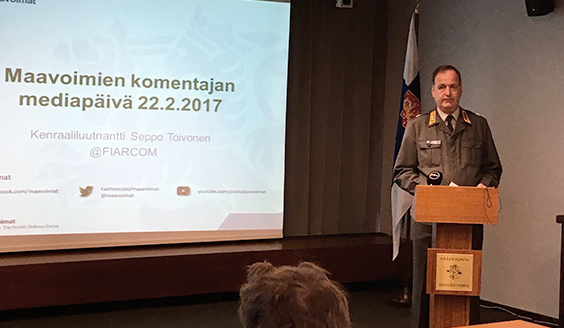 Examined from the Finnish Army viewpoint, the past year 2016 was successful in that nearly 20 000 conscripts were trained and over 20 000 reservists undertook training in versatile refresher training and voluntary exercises. Cooperation with other authorities included offering executive assistance 450 times and having altogether 1150 soldiers serve in crisis management operations.

- This past year was a successful one in that we fulfilled all the tasks assigned and objectives set to us. Once again, we achieved the most optimal results so far in the Conscripts’ Final Survey outcome, and we will continue advancing development of training and quality measures. Regarding the cooperation with other authorities, the number of demanding tasks of executive assistance to the Police has increased and we have been prepared for this by intensifying training together with the Police, said Commander of the Finnish Army, Lieutenant General Seppo Toivonen.

Focus is on Readiness

As of the year 2014, the Finnish Army has responded to the changes in the security environment by developing its readiness capability. Currently, the Finnish Army sustains several forces formed by personnel, conscripts and reservists that enable enhancing readiness within hours when necessary. Sustaining an extensive reserve facilitates territorial defence coverage and capability over a long-term time span.

Finnish Army is Active on the International Arena

In 2016 the Finnish Army actively implemented its assigned third task, participation in international crisis management operations. According to Commander of the Finnish Army, these operations mainly fall into two categories: ones which provide support by stabilising a post-conflict setting and others which provide aid to local security authorities in fighting cases of Islamic extremism.

- Obviously, it is the OIR operation in Iraq that is of interest at the moment. As for the Finnish Army, the operation has progressed well in that we have trained 1500 Peshmerga soldiers and treated approximately 500 patients who sustained injuries. All the feedback accrued has been positive. Yet it is clear that this type of operating environment poses challenges also to our soldiers but so far everything has progressed successfully.

- These projects are indispensable in sustaining our operating prerequisites in situations of crisis. After all, the Finnish Army functions as part of the system.

- Implementation of development phases asks for examining the full context. Resorting to cost-effective solutions has enabled us to develop significant materiel capability. In particular, I am content with how we have proceeded in the operational artillery project of the Finnish Army, and this year brings about the training of personnel. However, it must be kept in mind that in the 2030s a number of materiel types will reach the state of decommissioning and thus we need to be prepared to facilitate continuity and operational needs.