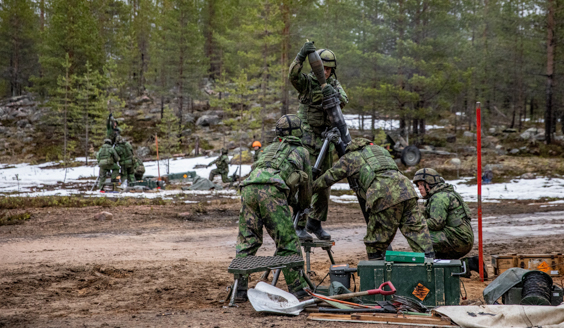 The mortar company of the Jaeger Brigade has continued conducting live fires in the exercise Northern Forest 21. This involves two fire platoons as well as the combat service supply and HQ platoons. During the exercise, the mortar platoons got to operate the heavy mortar 120KRH92 to fire smoke and fragmentation grenades.

Before firing, the conscripts inspect the grenades and their fuses for any sustained damage. This is followed preparing the grenades for set off. The instructor inspects the grenades to be fired and ensures that all procedures are correctly carried out.

Completing his military service as a readiness unit fire platoon 2IC, Sergeant Juntti, from Tornio, explains the best part about serving as a platoon 2IC.

-    The best thing in this is to get to lead people, and partly also sections as well. Live fires always provide great experiences.

Jaeger Ervasti from Muhos and Corporal Alanko from Oulu tell about the characteristics needed while serving in these duties.

-    At least patience, sense of situation, and own initiative are necessary.

Corporal Alanko emphasises the importance of own initiative.

-    While carrying out these duties, own initiative becomes very important. No one is necessarily around to give you any orders here. This is why you have to figure out what must be done in order to get the job done and over with.

Corporal Roosa Eskola from Raahe operates as a mortar leader. She says that she checked all mortar skeleton crew duties before determining that the mortar leader position is the most optimal one for her.

-    I immediately liked the mortar leader duty the best. Anyway, being not that tall, this suits me best as you do no have to be tall at all.

-    At first, when I didn’t know what to expect, I was somewhat unsure about serving in the CSS platoon, but, so far, the duty has surpassed my expectations.

Toljamo and Mattila tell about the support missions carried out by the CSS platoon.

-    We supply the platoons of the mortar company with, among others, the fuel, food, ammunition and firewood. The best part is when you are able to help out other platoons by what you do.

Officer candidate Atte Räihä, from Liminka, and Corporal Sini Kaarto, from Oulu, operate together as part of the HQ platoon. They will complete the conscript service part of their military service on 17 June 2021 as they muster out into the reserve.

-    For sure, it will be slightly weird to return back to the civilian life now that I am used to this military way of life, Corporal Kaarto says.

The exercise NF21 will continue until 3 June 2021. Most rewarding exercise continuation to all exercise participants! On social media you may follow the largest exercise of the Army this year with

Before firing, the conscripts inspect the grenades and their fuses for any sustained damage. After this, the grenades are prepared for set off by screwing the fuse onto the threads of the lever. The instructor inspects that all procedures are carried out correctly.