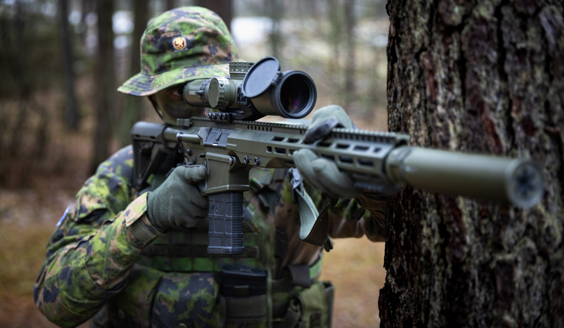 The new rifle system to be procured for the infantry increases the usability of snipers as well as the precision and range of infantry sections.

The Minister of Defence Antti Kaikkonen has authorised the Finnish Defence Forces Logistics Command to sign a procurement contract for the procurement of a new rifle system manufactured by Sako Ltd.

Semi-automatic Sniper Rifle 23 is equipped with a high-quality optical sight that together with precision ammunition enables snipers to achieve effects in different targets up to a distance of 800 metres.

Designated Marksman Rifle 23 is more simplified in its weapon-mounted equipment, and designed for use by jaeger and infantry sections designated marksmen. This weapon increases the sections range up to 600 metres.

Based on the AR10/15 models of a semi-automatic rifle in 7.62NATO calibre, Rifle System M23 features additional benefits compared to the currently fielded one, such as integrated weapon-mounting available for versatile accessories, including tactical night sights, and suppressors, increased accuracy, as well as a design that is both lightweight and ergonomic.

- The rifle procurement is included in the Land Defence Development Programme, and it is part of the capability development of the Army’s operational forces and local units. This project builds a completely new capability, and replaces most of the old 7.62 Sniper Rifle 85s currently in service, as well as completely replaces the 7.62 Sniper Rifle Dragunov, sums up the Inspector of the Infantry, Colonel Rainer Peltoniemi.

- The rifle system has been developed together with Sako, and the weapons will be produced in Finland. This project improves our security of supply and promotes retaining skills and technology in Finland, as well as the ability to manufacture and repair weapon systems here, he emphasises.

Furthermore, the Minister of Defence has authorised the FDFLOGCOM to sign an implementation arrangement with Sweden that authorises carrying out a joint procurement effort by Finland and Sweden.

The implementation arrangement signed on 21 December 2021 is a continuation of the collaboration effort agreed on earlier in September, as part of which Finland and Sweden signed a technical arrangement concerning joint procurements of soldiers’ weapons systems and associated technologies. Additionally, a Technical Arrangement was signed in the event on the 21st of December, enabling the joint procurement of ammunition.

- The procurement of this rifle system is a significant step, which enables concrete and combined small arms procurement between Finland and Sweden also in the future. The goal of both countries is to achieve costs benefits, as well as to improve our security of supply and interoperability with each other, says Peltoniemi about the approved arrangement.

The first lot of deliveries will be received by the Army by the end of 2022, and the rifle system training is due to begin during 2023.

The MOD release on the procurement was published on 21 December 2021.

The FDFLOGCOM published a release on Finland and Sweden having signed an arrangement regarding weapons systems on 3 September 2021.