Night combat capability to be complemented by illumination devices 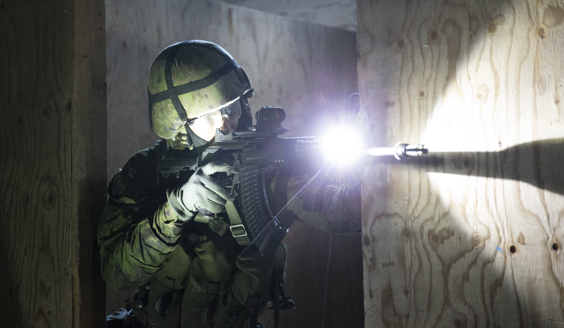 Minister of Defence Antti Kaikkonen has authorised the Defence Forces Logistics Command to sign contracts with two Finnish manufacturers for the procurement of weapon lights, helmet lights and Identification Friend or Foe beacons for soldiers.

The weapon lights and helmet lights will be supplied by Hantaurus Shot Ltd and the IFF beacons by Finnprotec Ltd.

The procurement was preceded by extensive field tests conducted in Finland in which the suitability and compatibility of 25 products having taking part in competitive bidding were evaluated.

A weapon light is an illuminator attachable to the weapon. It is used for target detection, as well as for facilitating the use of fire and movement.

A helmet light is a light attached to the helmet or a mount used as a work light for activities re-quiring additional illumination, e.g.  for map reading or providing combat first aid, or as a signal-ling device, if needed.

These procurements are included in the national defence development programme, and they are a part of the overall infantry night combat capability development.   The procure-ments are aimed at building infantry troops’ ability to fight at night and in poor visibility conditions.

- The night vision devices procured now and the night operations equipment on the procurement of which information was disseminated earlier (image intensifiers, laser sights and red dot sights) have been designed and tested to operate as one entity.  Thanks to these procurement packages, infantry fighters will have a completely new capability to operate and fight in all visibility circumstances, Inspector of the Infantry, Colonel Rainer Peltoniemi sums up.

The first products will be delivered by the end of 2021 and taken into use starting from 2022.