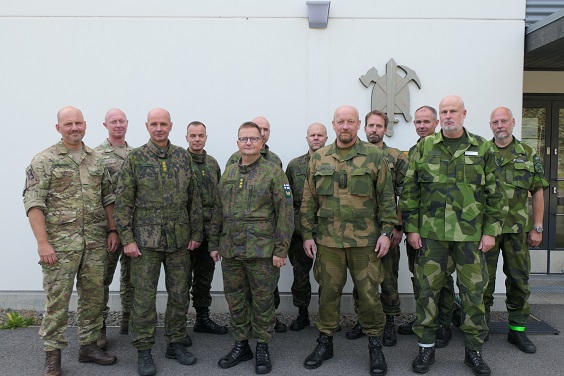 In the Army Academy, this week involves increased international activity in that the annual meeting of Nordic Inspectors of Engineers started on Tuesday 21 September 2021. This meeting convenes Inspectors of Engineers and their advisers to Lappeenranta from altogether four Nordic countries: Sweden, Norway, Denmark, and Finland, this year’s host nation.

The meeting is led by Inspector of Engineers, Colonel Juha Helle from the Army Command Finland (in the photo third from left).

Apart from convening the meeting, the Military Engineer School also familiarises the attendants with its training, and allows colleagues to take benefit from experiences on student and instructor exchange conducted between Sweden and Finland.

At annual meetings, the participating nations’ representatives discuss the current situation of the service branch, its prospects for development, as well as exchange information relating to, among others, materiel procurement.

The annual meeting of Inspectors of Engineers was postponed from last year to this September due to the coronavirus pandemic.