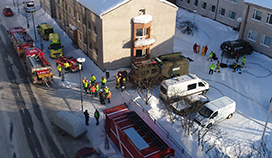 On 24-28 February 2020, the Jaeger Brigade and other authorities in the Lapland region will continue training practical interoperability in inter-authority situations in the local defence exercise Lappi 20 in the region of Sodankylä–Kittilä–Rovaniemi.

The local defence exercise aims to develop readiness and defence capability in the area of the Lapland region, exercise personnel in local defence tasks and missions, as well as deepen practical interoperability in inter-authority situations.

On Wednesday 26 February 2020, the exercise will be seen in the area of Kittilä Airport as personnel and equipment of the Finnish Defence Forces, Rescue Services, Police, Border Guard, and Hospital District are on the move at the airport. The exercise area will be cordoned off, and the Military Police will control the traffic.

Online on the Finnish Army exercise site at https://maavoimat.fi/paikallispuolustusharjoitukset
From 24 February to 6 March 2020, the local defence exercises led by the Army brigade-level units will be organised in South Karelia, Central Finland, Lapland, North Karelia, South Savo, Satakunta, and Uusimaa.