Generating trust between nations by means of openness in military cooperation and observation visits. In conjunction with the exercise Kaakko 19, Finland invited for an observation visit observers from 13 of the participating states of the Organization for Security and Co-operation in Europe, OSCE, of which 11 accepted the invitation.

- Military observation and observation visits indicate openness and transparency that in turn contribute to building trust. It is beneficial to be able to observe and get to verify a given military activity to determine what type of an activity it is and how a neighbouring nation organises and exercises this activity, Major Toivanen says.

According to the OSCE’s framework and the Vienna Document, the invited observers to field training exercises need to include neighbouring nations, cooperation partner nations as well as those OSCE participating states that may be interested in a given exercise. In accordance with the Vienna Document, Finland invited observers to the exercise Kaakko 19 from nations that included her neighbours Norway, Sweden, Russia, and Estonia, Nordic countries (Iceland and Denmark), Baltic coastal countries (Poland and Germany) as well as cooperation partners, namely, the UK, France and the USA.

Operating on a voluntary basis, the exercise organising host state remains capable of making the decision as to which nations she invites for an observation visit. In Finland, the Ministry of Foreign Affairs, the Ministry of Defence and the Defence Command jointly make this decision.

The OSCE observers will familiarise with the exercise entity and the objectives of the exercise Kaakko 19. Apart from the emphasis on openness and transparency, all OSCE participating states respect that nations safeguard their sensitive, restricted and classified material.

- During the course of this visit, the OSCE observers familiarise with the exercise entity, exercise troops, set objectives as well as operating, Senior Staff Officer Arms Control, Major Arto Toivanen from the Defence Command explains. 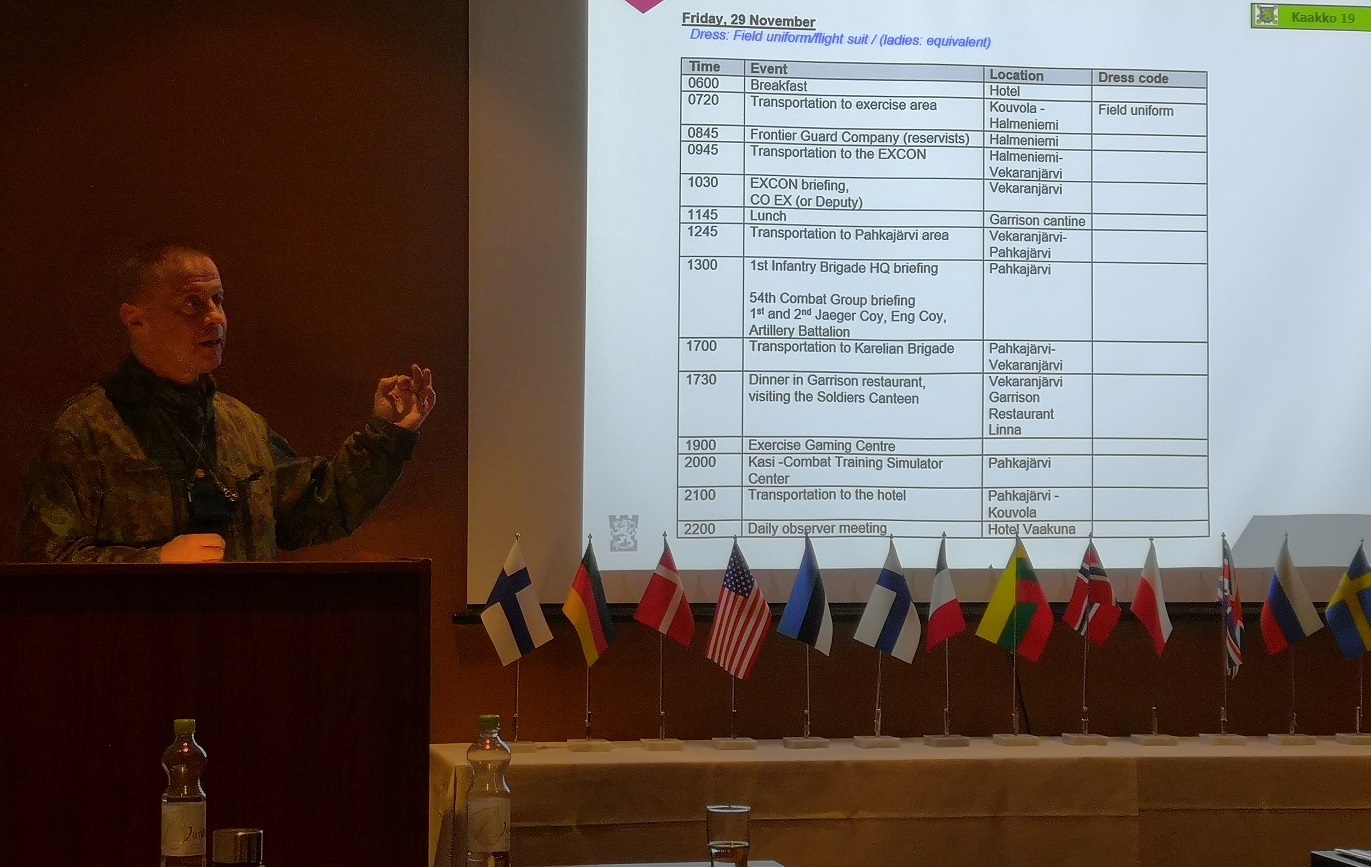 The programme for the OSCE observers will include, among others, visits to the Pahkajärvi range and training area, the Karelia Brigade and the Combat Training Simulator Centre. In addition, the visit will comprise familiarisation with the Finnish Defence Forces’ air operations at the Kymi airport as well as activity topics ranging from logistics to local defence companies to the notion of Finnish liability for military service. During the observation visit, meals will be served both in garrison restaurants and in the field.

Balance between the talk and the walk

To illustrate this interaction thematic, Major Arto Toivanen draws a comparison between arms control measures as implemented by nations and the procedures applied by persons involved in a relationship.

- If two people involved with each other fail to balance the talk and the walk and rather shy away from being open to each other, all sorts of questions are bound to surface. The questions then bring about mistrust and generate threat scenarios that may lead to taking up various types of measures and even overreacting, Major Toivanen describes.

Similarly, an open democracy in the western hemisphere, Finland sustains a balance between the talk and the walk. Finland walks the talk to demonstrate that she is a reliable cooperation partner and a good neighbour sustaining a credible defence supported by a strong will to defend.

As for Major Toivanen, for the past seven years he has served in the Finnish Defence Forces’ in the position of a Senior Staff Officer Arms Control. This tasking involves observer visits to field training exercises and brigade-level units overseas. In this capacity, Major Toivanen also bears the responsibility for arranging Confidence- and Security-Building Measures, CSBMs, in Finland, which include, among others, observer visits, observation measures, area surveys, brigade-level unit assessment visits as well as fixed-term visits to brigade-level units.

In Major Toivanen’s view, the OSCE equals a significant actor via its interaction, treaties and CSBMs.

- Compliance with these documents and procedures is the only way for sustained military cooperation conducted with a high number of countries. Within the OSCE, the participating states all hold their own political and military views. Usually, the political stands get to be aired in the media and tend to emphasise differences in nations’ takes on given issues. However, when a soldier meets another soldier, the discussion is practical and down to earth.

- The OSCE, its interaction and documentation, including the Vienna Document, enable conducting so called mil-to-mil cooperation with nations with which this would otherwise not necessarily take place, Major Toivanen says. 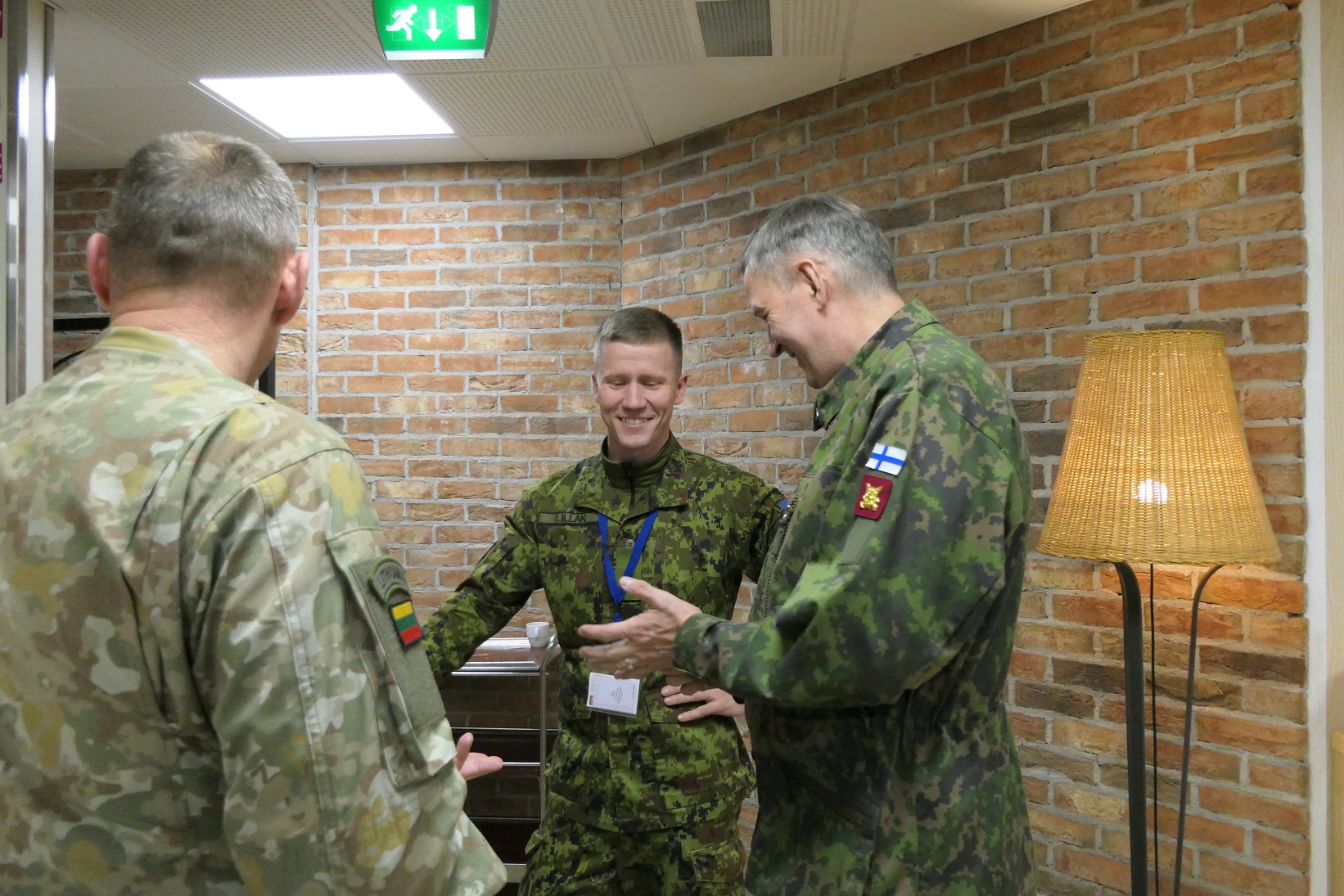 - I took part in paratroopers’ ice swimming training near Moscow. First, the mere fact that we foreigners were able to participate in this training event was unforgettable. Our Russian colleagues were most likely thinking that none of the OSCE observers would take a dip in the ice. Yet, I did, and ended up being in no hurry at all to get out.

When hosting OSCE visits in Finland, Major Toivanen tries to include an ice swimming opportunity as part the programme.

- Part of our Finnish culture and often on an OSCE observer visit programme as well, ice swimming offers foreign OSCE Arms Control specialists an experience that is both unforgettable and refreshing.

Unless this weekend sports sub-zero degrees Celsius with ice cover emerging on the waterways in the exercise area, the OSCE observers of the exercise Kaakko 19 will escape an ice swimming experience this time around.

OSCE and the Vienna Document 2011

Finland is part of the Organization for Security and Co-operation in Europe. One of the key objectives of the OSCE involves exchanging military information and conducting cooperation as furthered by the Vienna Document initially signed in 1990 and last updated in 2011. This document advocates openness and transparency relating to states’ military power to generate confidence and security and decrease mistrust between nations.