Defence Cooperation of the Finnish Army - Systematically towards Deepening Integration

In the 2030s, the Finnish Army functions as an active cooperation partner both bilaterally and as part of coalitions.

The interoperability of the Army concerning its key forces and capabilities has been developed to a level that facilitates joint operating in accordance with requirements set by both national and international tasks.

In the 2030s, the defence cooperation of the Army forms a part of everyday activities.This sustained interaction with other nations’ armed forces comes naturally to its personnel, conscripts and reservists. Capabilities are increasingly constructed in coalitions formed by willing partners or bilaterally. Similarly, while training, the utilisation of capabilities, multinational exercises assume a more significant role compared to the present day. These exercises are flexibly organized both in Finland and in varying European countries. The technological solutions for C3 and exchanging common operational picture become more streamlined in Europe. This allows real-time C3 connections at different levels of C2 structure between nations.

The objective in developing the Army’s international interoperability is in enabling the receiving and providing of military assistance. Operational interoperability is constructed on accounting for the whole defence system with the focus on lines of communication between C3 and fires. At the tactical level, the development focuses on building up secured voice, common operational picture and digital fires in cooperation with key partners. This facilitates ground-to-ground and air-to-ground fires by means of digital, interoperable systems and procedures. 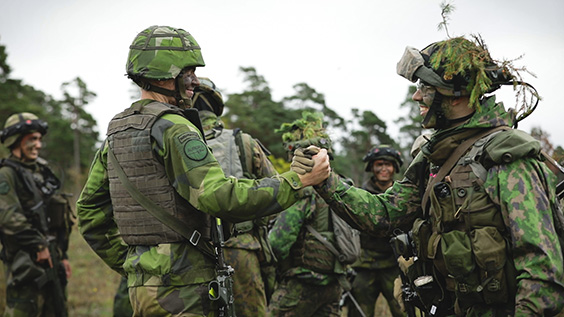 The Army’s defence cooperation rests on close cooperation between the armed forces functioning in the Baltic Sea region and in the Nordic countries. The most significant partner countries are Sweden, Norway, and the United States, with whom this cooperation has become deepened in the areas of information exchange, research and materiel cooperation as well as exercise activities. Operational cooperating with Sweden is carried out without restrictions. Standardized exercise procedures with the United States cover training with the U.S. Army, Marine Corps, and National Guard.

Within the NATO structure, coalitions of like-minded countries comprising member and partner nations aim at generating closer regional cooperation in overall NATO development. As part of this framework, the Army actively functions in coalitions led by the United Kingdom and Germany. On a regular basis, the Army trains with the NATO troops and units operating in the Baltic States and in the Baltic Sea region. Moreover, the Army partakes in the European Union’s common security and defence policy cooperation whose primary goal is in achieving cost savings in the form of joint defence materiel acquisition.

The Army takes initiative in organizing multinational exercises in the area of the Nordic countries. Annually, the Army arranges a number of international exercises that are implemented both in winter and summer conditions in Northern and Southern Finland. Featuring technologically demanding exercises, this training activity consist of training with key partners the type of interoperability including digitally executed C3 and fires as well as operations by mechanized troops.