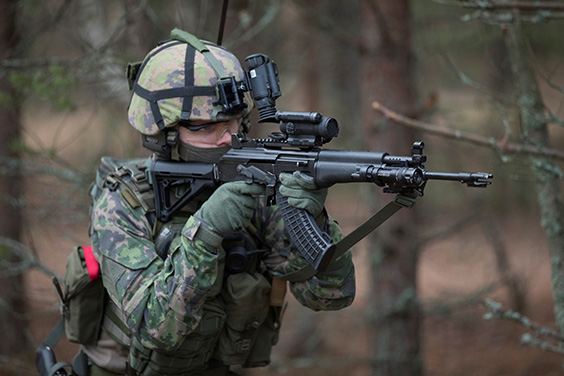 Developing Soldiers Capability into the 2030s

Expertised, well-trained and well-equipped soldier is the backbone of a capable unit. The Finnish Army takes care of its soldiers and owns the responsibility for ensuring that their combat skills, will and equipment remain in good condition while advancing to the 2030s.

The Army invests in developing the soldiers’ capability holistically in order to ensure that the soldiers’ skills, will and equipment meet the requirements set by the battlefield of the 2030s. The Army renews and further develops procedures that strengthen the will to defend and create the cornerstone for land defence, namely, the will to defend one’s own country and sustained faith in one’s own opportunities.

In the future, a soldier has access to increasingly intelligent solutions and equipment with which to execute the set missions both independently and as part of a unit. The soldier’s firepower, survivability and situational awareness are improved to respond to future challenges. Situational awareness concerning friendly forces and those of the adversary may represent the most critical asset in improving a soldier’s capability. This is evident in how a soldier needs to be able to detect and identify an enemy prior to becoming targeted, sustain real-time communications with own unit members as well as clearly know the location of own troops. Regardless of how advanced the gear, a human being - the soldier - remains central. Thereby the equipment must support the fulfilling of the soldier’s main task and remain simple enough to use. Renewal of training and novel types of training tools also seminally aid in learning, implementing and sustaining new systems and procedures in combat.

An increasingly multidimensional and mobile battle concept presupposes that new features be part of the systems utilised by a soldier. In the Army, the capabilities of a soldier are developed by means of a number of programmes. In the first phase of the Soldier Programme, the firepower of a soldier is improved by implementing the modernization of the assault rifle (RK62M) and acquiring optical sights as well as night vision equipment. Furthermore, a soldier’s survivability is improved by means of developing and acquiring personal ballistic protection and new combat clothing.

Mobile tactical network is developed and improved in Army C3I (M18) program. Commanders and leaders have access to weather-proof end-user terminals that enable forming a common operational picture of the area of operation and receiving missions or transmitting tasks. In the near future, utilization of software-defined radios allow for producing real-time common operational picture (location data, picture, sound, sensor data) and sharing these data at all levels of the organization.

The bespoke projects on force protection and CBRNe serve in developing the soldier’s survivanility by the acquisition of camouflage nets, improvement of the equipment stealth features as well as acquisition of new CBRN respirators. The capability of scouts and forward observers has been enhanced by acquisition of new thermal imagers and target acquisition devices whose data transmission is embedded as part of the digital command and control system.

It is possible to improve significantly the soldier’s ability to win in the battlefield by means of new sensors that enable detecting, identifying and delivering joint effects on targets with improved precision in all prevailing weather and lighting conditions. It is estimated that new technological innovations are adopted in large-scale utilization during the course of the 2030s.

While the soldiers’s tasks and missions remain the same, the technological solutions and procedures may undergo significant changes. The future battlefield continues to be shaped by, among other things, automatization and robotics. In the future, the soldier has access to increasingly sophisticated solutions and equipment that allow for observing the battlefield and carrying out missions non-supported.

As part of command and control systems as well as ISTAR, the advantages of augmented reality, familiar from mobile gaming contexts, will be available, as will also be artificial intelligence for decision-making purposes. In the 2030s, both small unmanned aerial and ground vehicles are going to be integrated in shared capability at squad level and partly also at the level of an individual soldier. Advanced fire control systems for handguns become increasingly utilised and even personal fire arms feature mounted versions of sophisticated intelligent sight systems that aid in target acquisition and timely precision firing.

Sustained efficiency in training enables combining the skills, will and equipment so that they build up capable forces. The tasks and missions of infantry soldiers, forward observers and scouts will be retained but also new ones are to surface for systems operators and maintenance specialists in technological logistics support. Moreover, the type of training perceived as traditional in demanding terrain conditions will still retain its essential role in order for the soldiers to internalize functioning as part of a unit and to prepare for enduring the hardships posed by the ever-altering circumstances in the battlefield. Parallel to this, the opportunities offered by novel simulators and virtual technologies will be optimally exploited. In the 2030s, neither a machine nor a piece of equipment will fully replace a human being – the soldier. The Finnish Army looks after its soldiers, trains them in their set tasks and missions and equips them with capable gear to win in the future battlefield.