Land defence in the 2030s will be implemented as part of a joint operation.

The future operational environment of armed conflicts and crises becomes increasingly versatile and extensive. Apart from the joint dimension of ground, maritime and air components, the parties of a conflict are also impacted by the space and cyber operational environments. However, not all the contributing factors affecting operating are necessarily troops as such with physical impact inflicted. Rather, this joint effects targeting may, for instance, take the form of transmission networks’ effects that are brought about without sustained control and surveillance by man-in-the-loop. These effects may include cyber-harassing the C3 networks or disabling location positioning systems via satellites.

In the 2030s, land defence is implemented as part of a joint operation that involves coordinating the utilisation of land, maritime and air defence capabilities as well joint capabilities to achieve a given desired end state. This joint operation may involve receiving international military assistance. 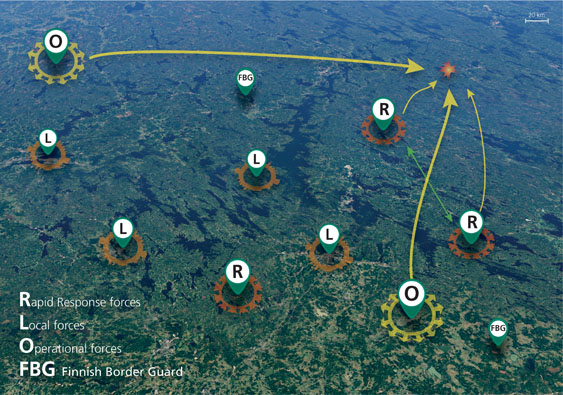 Land operating capability remains strongly sustained. Land operations equal operations conducted under the command of the Finnish Army in which the functions of the Army’s service branches and functional areas are coordinated and with which attacks by land are pre-emptively prevented, repelled or defeated, and by means of which society’s vital key targets, areas and fuctions are being protected. The land operatons conducted in the 2030s rest on the repelling and wearing-down strength of the Rapid Response forces (RRF) and local forces combined with general support fires into the aggressor’s depth as well as the strikes by the operational forces in order to grab the initiative and solve the situation. The combat conducted by the RRF and operational forces receives support from the border forces and local forces. The operations conducted under the command of the Army are supported by the joint capabilities of the Defence Forces as well as by the combat by the Air Force and the Navy.

Developing land defence produces capabilities that enable the operational mobility of troops and systems as well as sufficiently far-ranging and effective general support fires in blocking the aggressor’s landoperations. Parallel to operational mobility and general support fires in its conjunction, in the 2030s, both the forces and systems of Army are enabling territorial operations.

The Army forces form the land defence capability and thereby enable the defence of the entire country and the establishment of a territorial point of main effort. As a whole, by the 2030s, the entity of land defence is given a resilient force structure that allows for rapid and efficient utilisation of land defence forces in versatile situational frameworks. The Army’s wartime units are categorized in accordance with their given utilization principles, readiness requirements, organization levels as well as service branches.

As regards the utilization principles, units are categorized into three as rapid response forces (RRF), operational forces and local forces, respectively. The rapid response forces raise an aggressor’s threshold for initiating a land operation against our country. These forces prevent the adversary from a free use of our land area, especially in case of a rapidly escalating situational framework if the adversary decides, regardless of our preparedness, to launch an operation.

The local forces are in turn developed and equipped to become increasingly combat capable and non-supported in combat, which allows them to prevent an adversary’s operations locally. The strengths of the local forces include thorough knowledge of their own operating environment as well as mission-specific bespoke training and equipment.

By the 2030s, as part of developing The Army, the forces and systems are given a C3 capability that enables effective C3. That means relying on command and control system that is able to generate a common operational picture, be resilient and adaptable, and is anti jamming capable. This C3 capability is generated by means of up-to-date technological and innovative solutions as well as high-quality training. The capabilities combined enable sustaining superior C3 capability compared to that of the adversary and executing operations in accordance with the principles of mission command also in cases when command and control systems or networks no longer remain utilizable.

Consequently, it is possible to cover the entire area of the country by combat sustained by the RRF, operational forces as well as local forces supplemented by supportive functions. The land defence forces exploit their operational mobility and effective fires capability. Flexibly utilizing the land defence forces and being supported by the joint capabilities of the Finnish Border Guard and Defence Forces enables shifting the point of main effort of the operation in whichever location within the country that the situation requires. However, the capability still remains for sustained defence by means of local forces with nation-wide coverage.

The implementation of land defence is planned and developed as part of joint operations. In addition, the Army undergoes development for sustained international interoperability. This sustained interoperability enables receiving international military assistance with land defence capabilities and, if necessary, providing military assistance for partner states also in the 2030s.

In order to develop and sustain international interoperability, the contemporary defence cooperation is continued and further facilitated both bilaterally and multilaterally. Generating interoperability includes sustained training exercise activity as well as building up capabilities in cooperation with partner states, corporations and organizations. As an end result of this interoperability buildup, land defence will be enhanced with the capability to execute inter-service joint operations in cooperation with other services, and with other nations’ armed forces.