In the 2030s, the land defence command and control system produces the C3 services by utilizing the existing system supplemented by technological advancement.

Independent of the time and location, the integrated Army C5ISR-system enables generating common operational picture as well as enhanced rapid operating. This facilitates prompt rapid planning and execution. Open data and geospatial data as well as overall infrastructure intelligence will be combined for systematic support of operations.

In operational planning and training at all levels, both virtual reality and augmented reality are exploited. The Army C5ISR-system enables operations in all terrain and weather conditions. Rather than being restricted by the operational environment, the integrated system adjusts with the prevailing conditions. Conforming to the requirements set by the given unit and mission, the Army C5ISR-system produces the services that enable the execution of C3. This integrated system offers support for the land defence forces in all missions and it exploits the capabilities produced by strategic acquisition procurement programs. 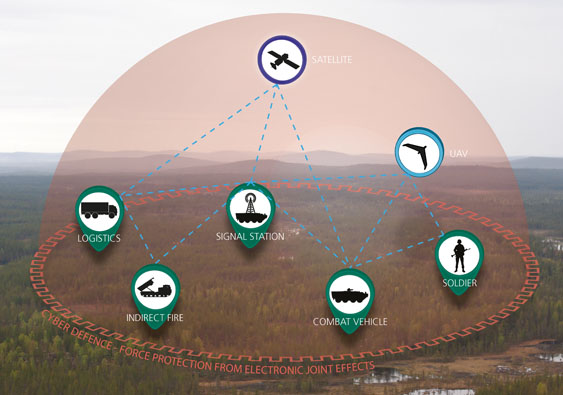 For sustained operating, the Army C5ISR-system requires C3 support troops tasked with setting up and maintaining the command and control system. The set missions and operating procedures define the requirements for the operating of the C3 support troops. The Army command and control system comprises the systems of combat C3 combined with authorities’ systems and every day functions. This entity is resilient with sustained battle endurance with the ability to respond to versatile requirements on all Army missions. This system supports cooperation with other parties. The strengths of the entity include the maximal utilisation of the existing system as well as society’s structures. This in turn enables further developing and sustaining the system cost-effectively.

Seamlessly integrating a human being with the systems, the Army C5ISR-system of land defence forms a networked entity, which enables common operational picture and rapid operating regardless of the timing or location. Data transmission avails of versatile opportunities, which introduces resiliency in C3 of mobile combat. Encrypted and cyber proof, the system enables operating in all conditions and situations. The troops are supported by services that allow for sustained exchange of information, lines of communication, as well as verification and integrity of location and situational data.

In the 2030s, the ability of the system to meet the requirements of land defence will be enabled by optimal exploitation of technological advancement. Artificial intelligence, software-defined characteristics, gaming technology and robotics as well as the development of unmanned systems pave the way for novel opportunities in constructing the Army C5ISR-system of the 2030s. The utilization of advanced technologies is facilitated by means of competent and innovative personnel as well as cooperation with science and research establishments.