February 2017 marked the signing of a 146-million-euro agreement that authorized the Finnish Defence Forces to procure 48 pieces of surplus 155-mm K9 howitzers from South Korea.

This procurement is realized as part of the Operational Artillery programme which was launched back in 2014 with the objective to replace artillery equipment that will be decommissioned. The set aim was to land with a far-ranging and mobile artillery system with which to effectively support the operational forces. In practise this equalled a 155-mm tracked or wheeled artillery piece with a life cycle service span extending into the 2050s.

The capability specifications of a given weapons system are influenced by a number of factors. Thus research results, field tests and use case experiences accrued over the past twenty years concerning the current artillery systems need to be combined as part of an extensive operational entity.

The beginning of the Operational Artillery programme involved examining several options. The request for information (RFI) that was submitted generated responses from a number of countries and manufacturers. During the phase of request for quotation (RFQ) it turned out that South Korea was interested in offering their surplus of K9 Thunder self-propelled howitzers. As a result, the K9 became available for field tests in Rovajärvi in November 2016. Having completed the tests, the Finnish Defence Forces suggested that Finland procure surplus K9 self-propelled howitzers complemented by the build up of a new unit type, namely, a heavy armoured howitzer battery. Apart from the procured howitzers, the said unit will need, among other things, systems of firing control, command and control as well as combat service supply. To complement this materiel acquisition, it is also necessary to draft training instructions and safety regulations, and to train personnel and conscripts.

At the time of writing this, the Operational Artillery programme proceeds as planned. Currently, a K9 armoured howitzer is available for conducting field tests and training the personnel. Acquisition deliveries proper started in February 2018. The training of consripts will be undertaken in 2019. And, as of 2020, the first wartime K9 Thunder unit will be in operational use. 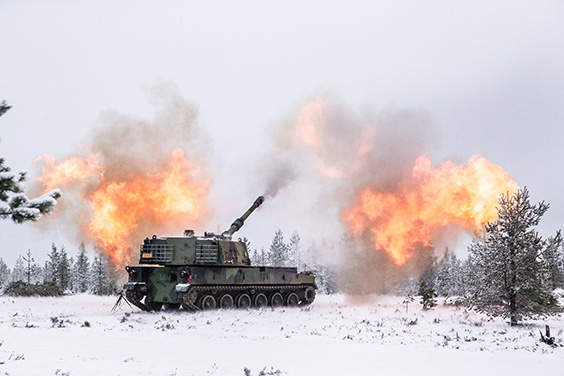