National Parade on the Finnish Independence Day in Tampere 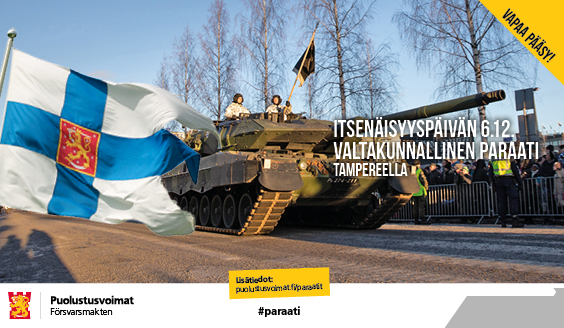 This year’s national independence day parade will be organised in Tampere. The review of troops will take place at Ratina Stadium and the pass-in-review on Tampereen valtatie. The venue will also include familiarisation with a versatile equipment display of the Finnish Defence Forces in Ratinanniemi.

The review of troops will take place at Ratina Stadium at 12 with the parade troops aligning to position from 11:30 onwards.

The pass-in-review conducted on Tampereen valtatie starting at 13 will involve up to a thousand persons, 56 vehicles, 12 aircraft as well as a 30-equine strong heritage cavalry detachment of the Tampere Region Cavalry Guild Association.

The flypasts of the pass-in-review will feature Finnish Army NH90 transport helicopters and Hughes MD500 light helicopters as well as Air Force F/A-18 Hornet multirole fighters and Hawk jet trainers. The flypasts will cause noise over the area of the Tampere city centre.

The review site for the pass-in-review is located at the intersection of Voimakatu. The parade will be reviewed by Deputy Chief of Staff Armaments and Logistics Lieutenant General Timo Rotonen, accompanied in the pass-in-review by Mayor of Tampere Lauri Lyly and War Veteran Timo Salokannel. The field devotional will be delivered in the review of troops by Field Bishop Pekka Särkiö. The parade troops will be commanded by Deputy Chief of Staff Army Operations Brigadier General Rami Saari. The parade arrangements remain the responsibility of the Armoured Brigade.

Programme for the day

Parade arrangements will result in changes concerning traffic arrangements particularly in the south part of the Hämeenpuisto park and on Tampereen valtatie. Parking restrictions will apply from 5 to 6 December 2019 especially in the areas of Ratina Stadium, Laukontori square and Voimakatu.

Preparations for the parade arrangements will begin on 5 December 2019 on parade locations while the main force of the parade troops arrive in the area of Tampere Trade Fairs and Sports Centre.

More specific information on the traffic arrangements will be provided on week 48.

Those looking to attend are reminded that the parade area is a no-flight zone, and drone aviation is strictly forbidden for sustained event safety with the exception of statutory authority functions.

The public is invited to attend all the events and kindly asked to arrive in good time.

You may also attend and observe the parade online on the FDF’s channels: