The cooperation between the Finnish and Swedish Armies progresses 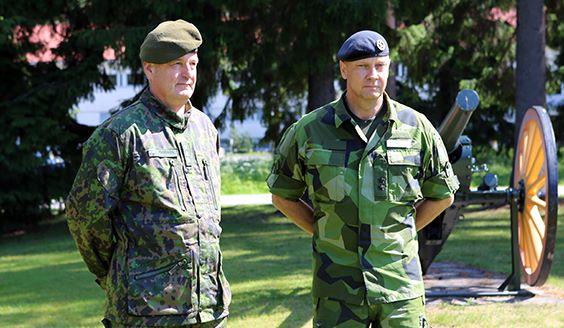 On May 2015 the Ministries of Defence in Finland and Sweden released a common statement regarding the deepening of the bilateral defence cooperation. During this year the military collaboration between the Finnish and Swedish Armies has taken concrete steps forward.

The recently appointed Chief of Staff of the Swedish Army, Major General Karl Engelbrektson visited the Army Command Finland together with his predecessor Major General Anders Brännström on 21 to 22 June 2015. During the visit, hosted by the Commander of the Finnish Army, Lieutenant General Seppo Toivonen, the experiences of the prior common exercises as well as future prospects of the cooperation were discussed.

The objective of the army cooperation is to develop a combined Finnish-Swedish brigade framework that enables the leadership of the nationally established forces. In regard to the forces, the main mission is to enhance the interoperability and force integration via a common exercise platform. The forces can be used, if so decided, for crisis management operations and national defence purposes.

In the army level, annual Army Staff Talks are held. For the brigade-level units, the cooperation with Sweden is visible as regular planning meetings, trainer exchanges as well as common exercises.

The Norrbotten Regiment located in northern Sweden has previously trained together with Jaeger Brigade and Kainuu Brigade in both Finland and Sweden. Furthermore, Finnish-Swedish cooperation was put into practice in the exercise Cold Response held in Norway in the beginning of May when the Pori Brigade trained together with the Swedish units. In November this year also the Guard Jaeger Regiment will implement the deepened cooperation as they will take part in the exercise in Sweden together with the Livgardet.

During this spring, the Finnish and Swedish Armies’ common objectives as well as the cooperation entity have become clearer. In addition, the planning has now been fitted to the exercise calendars and resources of both of the Armies. The common exercises are planned as part of the Armies’ normal annual planning.

The objective of the training and exercise events and the increased dialogue in the brigade-level is to establish common practices within the cooperation. The special features, equipment as well as the region of the brigade-level units are taken into account in the development process.